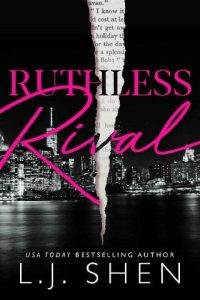 A person is, among all else, a material thing, easily torn and not easily mended.

Do. Not. Touch. Anything.

That was the only rule my mother had ever enforced, but it was one I’d known better than to break as a kid, unless I was in the mood for some belt thrashing and grits with weevils for the month.

It was the summer break after I’d turned fourteen that lit the match that’d later burn everything down. The orange spark would catch and spread, devouring my life, leaving phosphate and ashes in its wake.

Mom dragged me into her workplace. She made some solid arguments why I couldn’t stay home and screw around—the chief one being she didn’t want me to end up like other kids my age: smoking weed, breaking padlocks, and delivering suspicious-looking packages for local drug dealers.

Hunts Point was where dreams went to die, and even though you couldn’t accuse my mother of ever being a dreamer, she viewed me as a liability. Bailing me out was not in her plans.

Plus, staying back home and being reminded of my reality wasn’t something I was keen on either.

I got to join her every day on her trip to Park Avenue, under one condition—I was not to put my dirty hands on anything in the Roth family’s penthouse. Not the overpriced Henredon furniture, not the bay windows, not the Dutch-imported plants, and definitely—most certainly—not the girl.

“This one’s special. Not to be tarnished. Mr. Roth loves her more than his eyesight,” Mom, an immigrant from Belarus, reminded me in her thickly accented English on our bus ride there, stuffed like blue-collared sardines with other cleaners, landscapers, and doormen.

Arya Roth had been the bane of my existence before I’d even met her. The untouchable fine jewel, precious compared to my worthless existence. In the years before I met her, she was an unpleasant idea. An avatar with shiny pigtails, spoiled and whiny. I had zero desire to meet her. In fact, I’d often lain in my cot at night wondering what kind of exciting, costly, age-appropriate adventures she was up to and wishing her all kinds of bad things. Freak car accidents, falling off a cliff, plane crashes, scurvy. Anything went, and in my mind, privileged Arya Roth was put through an array of terrors while I lounged back with popcorn and laughed.

Everything I knew about Arya through my mother’s awestruck tales, I disliked. To add insult to injury, she was exactly my age, which made comparing our lives both inevitable and infuriating.

She was the princess in the Upper East Side ivory tower, living in a penthouse stretched across five thousand square feet, the kind of space I couldn’t even fathom, let alone envision. I, on the other hand, was stuck in a prewar studio apartment in Hunts Point, the loud arguments between the sex workers and their clients under my window and Mrs. Van berating her husband downstairs the soundtrack of my adolescence.

Arya’s life smelled of flowers, boutiques, and fruity candles—the faint scent of it clung to my mother’s clothes when she came back home—while the stench of the fish market near my apartment was so persistent it permanently soaked into our walls.

Arya was pretty—my mother kept banging on about her emerald eyes—while I was wiry and awkward. All knees and ears poking out of a haphazardly drawn stick figure. Mom said I would grow into my features eventually, but with my lack of nutrition, I had my doubts. Apparently, my father had been like that too. Gangly growing up but handsome once ripe. Since I’d never met the bastard, I had no way of confirming that claim. Ruslana Ivanova’s baby daddy was married to another woman and lived in Minsk with his three children and two ugly dogs. The one-way plane ticket to New York had been his parting gift to my mother when she’d told him she was knocked up with me, along with a request she never contact him again.

Since my mother didn’t have a family—her single mother had died years earlier—that seemed like a perfectly sensible solution to everyone involved. Other than me, of course.

That left us alone in the Big Apple, treating life like it was after our throats. Or maybe it had already clutched our necks, cutting off our air supply. It always felt like we were gasping for something—air, food, electricity, or the right to exist.

Which brings me to the final and most damning sin of all committed by Arya Roth and the main reason why I had never wanted to meet her—Arya had a family.

A mother. A father. Uncles and aunts aplenty. She had a grandmother in North Carolina, whom she visited every Easter, and cousins in Colorado she went snowboarding with each Christmas. Her life had context, a direction, a narrative. It was framed, fully plotted, all the individual pieces colored neatly, while mine seemed bare and disjointed.