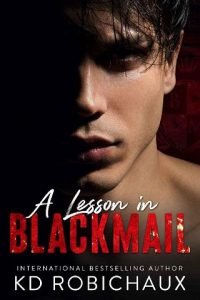 Skittish little mouse. That’s what she is. With her thick-rimmed glasses perched on her cute, slightly upturned nose. Her light-brown hair falls around her face, and she doesn’t bother pushing it back, instead using it as a curtain to shield herself. When someone approaches her circulation desk here in the school library, Ms. Richards quietly helps them with a small smile on her face, her full lips slightly twitching in the corners with nervousness, even though she’s supposed to be the authority figure here. This is her domain, as Black Mountain Academy’s librarian. Yet, she reacts to us students as if we’re the boss of her.

I sit at a long wooden table surrounded by five other chairs filled with fellow upper crust students in my class. My six-three frame takes up more than my half of this side of the table, my arm laying across the back of Lindy’s chair next to me. She’s talking across me to Reese Trenton, who’s pretty much the only true friend I’ve got in this place. Everyone else just wants a piece of me, being Nathaniel Jacobson Black IV, great-grandson of the founding father of Black Mountain Academy. Hell, our family founded Black Mountain—period. Lindy’s hand frequently brushes against my abs, even as she tries to flirt with Trenton, leaning over me to get closer to the both of us. Fucking ho. She’s slept with three quarters of the swim team, me included.

I allow a second to think about if she knows we all call her an initiation to the team, not that she’d care. She wears her skank status like a badge of honor.

But my mind quickly turns back to who I’m actually infatuated with.

Evie to her fellow staff members.

She’s younger than the rest of the teachers. Twenty-two, maybe twenty-three. Yet she seems so much younger than even my eighteen years. She radiates purity, innocence, and it calls to the darkness inside me that wants to dirty her up.

My favorite part of the day is study hall, when I get to come to the library and fuck with her. I live for the hour in which I get to make her squirm. Nothing is better than leaning far over the circulation desk, forcing her to meet my eyes, only inches away from her delicate features, and asking the virtuous Ms. Richards in a low, gravelly voice where I can find a book on the Kama Sutra. And then hearing her stutter trying to get the words out that nothing like that can be found in the academy’s library.

I’m sure half the things I say and do to her could be labeled as sexual harassment, but who’s going to turn me in? The descendant of the very people she works for.

So I sit here and stare at her, like I always do, watching her try to ignore the heat of my gaze I know she feels, because every once in a while, she can’t help but to look up and check to see if I’m still staring.

“Stop being a creeper,” Trenton tells me when Lindy finally gives up and turns to face Megan in the other direction, and he punches me in the arm closest to him. “You’re going to make that poor woman piss herself one of these days.”

“It’s just too easy,” I murmur, catching her purse her lips as if she heard my voice but is still fighting not to glance this way.

“I’ve done some fucked up shit in my day, but this? This is low, man. Pick on someone your own size. She’s like… half of you.”

I can see him shake his head in my peripheral vision, never taking my eyes off Ms. Richards.

I smirk. “There’s just something about her. She’s nothing like the girls we’ve grown up with. The hos we’re surrounded by,” I tell him low enough only he can hear. “She’s so innocent-looking. So quiet.”

“Well… she is a librarian. It’s kind of in her MO to be quiet. And innocent? I don’t know about all that. Don’t they say it’s the quiet ones you need to watch out for? I bet she’s a freak in the—”

Two things happen simultaneously at that moment. Ms. Richards turns a startled expression our way, having clearly heard Trenton’s assessment, and the bell rings, cutting off what he was about to say and indicating study hall has come to an end.

But I don’t move. My eyes narrow on her flustered features. What was she so startled by in his words? That two young men were talking about her in a sexual light, or was it that Trenton hit the nail on the head with his warning about the quiet ones?

She whips around to face away from us when she sees my measuring look, and I finally glance away from her to gather my books and stuff them in my backpack hanging on the back of my chair as I stand. I stick my pen behind one ear and lace my arms through the straps of my bag before shoving my seat under the table like a fucking gentleman, rolling my eyes when everyone else besides Trenton just leaves theirs out for anyone to trip on, for Ms. Richards to do their dirty work. He knows this shit makes me crazy and is a good enough friend not to fuck with me.