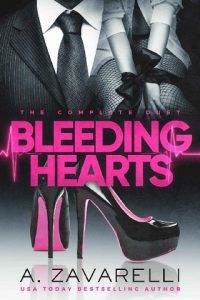 His heart is the rhythm. Mine is the echo.

I stared at my face in the mirror, steeling myself with another deep breath.

The glass was cracked down the middle, a direct reflection of how my heart felt at that moment. The girl staring back at me was fractured, and would probably never be whole again.

I swiped some more powder over my blotchy skin to hide the fact that I’d been crying. My pale skin always betrayed me, and beneath the crappy orange glow of the lights in our trailer, it looked even worse.

My brother would be pissed if he knew if I was in here mourning him already. There would be plenty of time for that later.

My eyes were bloodshot, and there wasn’t much else I could do about that. So I swiped on some strawberry lip gloss and practiced my fake smile. My lips hurt already.

I smoothed out the wrinkles in my ivory lace dress and frowned. I’d made it myself, and it was one of my favorite pieces. After tonight, I doubted I’d ever want to wear it again. Just like everything else, it would be tainted by this memory.

My mom told me I should wear something nice tonight, for Brayden’s last hurrah. This was the only nice thing I owned, and she insisted the white looked good with my red hair. While I would never turn to Norma for fashion advice, she was right.

White was the color of light and goodness. And I needed as much of those things as I could get in my life right now.

Someone banged on the door, and I cringed when I heard Brayden’s voice.

“I know you’re in there, Brighton. Come out please.”

He’d caught me hiding, and I immediately felt guilty for it.

I’d have tomorrow and every day for the foreseeable future to wallow in my despair. But tonight I needed to entertain my brother’s friends and pretend that everything was okay. That he wasn’t going back to court tomorrow and most likely not coming back.

I opened the door and gave him a nervous smile. He was my twin brother, but the differences between us were night and day. He got all of my father’s Italian features, whereas I was a reflection of Norma’s Irish ones.

He shook his head and gave me that disappointed look. The one I hated. I could handle that look from anyone else, but not Brayden. He was my rock. The only solid thing in a world that felt like quicksand. But I was losing him too.

My smile widened, and it hurt my face. Inside I was crumbling, but I couldn’t show him that.

He gripped me by the arms and held me steady as he spoke, his strength as unwavering as it always had been. “It’s going to be okay.”

My lip wobbled, and I tried to look away, but he wouldn’t let me.

“You’re tougher than you think, Brighton,” he said. “In a couple of years, you’ll be able to get out of here. Go anywhere you want.”

“You have to, goddammit.”

I flinched away, shocked by the ire in his voice. His eyes filled with regret a moment later, and I thought I saw a flash of the warmth that used to lie in their brown depths. So much of that warmth had disappeared over the past year.

“Listen.” He blew out a breath. “You can’t stay here, Brighton. This place… its poison. And you’re too good for that. So you have to promise me… promise me that you’ll take the first opportunity you get to leave.”

It wasn’t a fair fight. Brayden knew I was in no position to deny him such a request. For him, all of the opportunities were over. He was a sixteen-year-old boy being charged with the crimes of an adult. Something I still couldn’t wrap my head around. There were too many charges to count. Too many atrocious things that I knew he wasn’t capable of.

“It was just an accident,” I whispered. “They can’t take you away from me, Brayden. They can’t. They’ll see. The lawyers will show them you didn’t mean to do it.”

Brayden sighed in frustration. We’d been over this a thousand times, but I didn’t care. I needed to believe this wasn’t happening.

“Everything they say is true, Brighton. I know you don’t want to believe it, but you have to. I killed that family. I ran them off the road, and then I left them there to die. And now I’m going away because that’s what I deserve.”

My chest constricted, and I fought for air as I forced my gaze to the ground. It wasn’t true. I hated him for saying these things. I knew it couldn’t be true. I wanted to scream. I wanted to run away and take him with me. Away from the horrible media and all of the darkness that surrounded us. But I couldn’t.