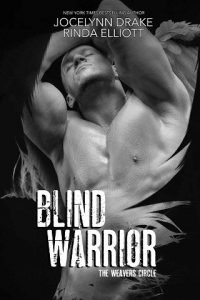 The doctor had used more technical terms, such as “optic pathway trauma” and “post-traumatic vision syndrome,” but none of it meant anything to him. It all boiled down to the same thing—he was blind.

The visual world had become a dark, overwhelming place since he’d been hurt the week before in a battle against the pestilents. The bastards had been stopped for now, and the Weavers had all survived, but the trade-off was that he’d been left without his sight.

As it was, he’d confounded the doctor because his friend Dane had managed to partially heal him. There were still lingering signs of a concussion and some bruising that was still fading, just enough of an injury that they could say Grey had been in a car accident. It wasn’t like they could tell the doctor that they’d fought a madwoman from another dimension who could control animals and that Grey had been caught in an explosion when he’d saved the soul mate of a guy who’d been a lion at the time. Yeah, not only would they not fix his sight, but they’d lock him up for being insane.

But if the Weavers’ resident healer could fix broken bones, concussions, and bullet holes, why the hell couldn’t he heal broken eyes?

Grey wanted to believe Dane would fix his eyes, but frustration and anger still ate at him, leaving his patience microscopically short. He didn’t do helpless. He didn’t depend on others.

But here he was, unable to do the simplest of things. He couldn’t even pour a damn glass of water without making an enormous mess. He had to stick his finger in the glass just to keep from spilling everywhere.

And the doctors wanted to do all these tests, trying to figure out why he’d gone blind when he didn’t show the usual head trauma. But he couldn’t do all the tests without raising a lot of red flags. The Weavers had to protect their secrets, and the freaking Soul Weaver couldn’t wipe any memories because he was fucking blind!

As it was, he’d walked out of the appointment when it was clear the doctor couldn’t do any more to restore his vision.

Now, sitting in the back seat of Baer’s Jeep as Lucien and Baer took him home, Grey turned his face toward the window, feeling the sun on his skin, but no change in what he could see. This part of Georgia was beautiful, too. It sucked missing out on the stands of live oaks with their moss-heavy limbs. He hated not seeing the sun sparkling on the landscape. Winter was on its way, and though they didn’t have heavy winters, he hated missing out on the last of fall. He could only imagine the plethora of November colors in the trees and landscape.

All he had was darkness.

“You sure you don’t want to let them do the MRI and CT scan?” Baer asked.

The seat squeaked as Baer turned in the front passenger seat to speak to him, his voice sounding closer.

Wait. Lucien was driving Baer’s Jeep? That was odd.

Baer’s red hair would have been dancing in the wind from the open windows, and his green eyes would likely be clouded with worry. Still, when Grey looked in that direction, he saw nothing. Panic rose in his chest, threatening to swamp him. He swallowed the lump in his throat. “I’m sure. How could I explain the missing injuries when they looked at my head? ‘Oh yeah, I’ve got this friend who uses magic to heal people. He just couldn’t fix my eyes.’ ”

Baer cursed softly under his breath, and the chair squeaked again as he likely shifted to look forward. With Grey’s sight gone, his perception of the world had greatly changed. There was none of this heightened-senses bullshit, not like in the comics, but he was more aware of how things sounded or smelled than he’d ever been before. For instance, he could smell the fall air coming in from Baer’s open window—someone must have been burning leaves, because the smell of wood smoke flavored the air. The scent of Lucien’s faint spicy cologne drifted past him here and there, caught on the breeze.

“It’s probably for the best,” Lucien said as he flipped on a blinker, creating a persistent clicking. “Did he offer any potential solutions? Surgery?”

“No,” Grey answered. “He mentioned rest. Giving my body some time to heal. But he wasn’t willing to offer anything else without all the tests.” Grey sighed and rubbed his sore eyes with one hand. They were dry and itchy. He wasn’t blinking enough, apparently. “I’m hoping none of that will be necessary. Wiley’s bound to find a good healing spell.” Baer’s mate had been poring over the spell books, trying to find the right incantation. They’d tried one already, but there had been no improvement in Grey’s vision.