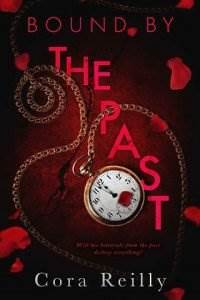 Betrayal is punishable by death.

A hypocrite. A liar. A murderer.

That’s what I was.

That’s why I was still here, not dead for my crimes, for my betrayal.

Five times I betrayed the Outfit. With my blood, I’d made a vow to our cause, had sworn my life to it, promised to put the Outfit first. Above all else.

Five times I’d chosen a woman over the good of the Outfit. I had betrayed my father. My vow. My men.

And yet my betrayals remained unpunished, at least by the laws of our world. But I’d paid with every betrayal with a betrayal in turn. I’d betrayed and been betrayed. Justice in its purest form.

You reap what you sow.

My life was a tale of betrayal. Eventually I’d have to make sacrifices that could cost me everything if I wanted to preserve what mattered the most.

Muffled cries made me stop in my tracks in the hallway. The wails came from the library. I followed the sound and opened the heavy wood door. Ines sat in the armchair in her favorite reading nook, a book in her lap, but I doubted she could see a single letter of the words on the pages before her. Tears stained her cheeks.

My sister wasn’t a crier, had never been, and except for a few occasions when she’d been a young girl, I had never seen her cry. Our father had taught us to suppress any kind of emotional turmoil.

I stepped in, making my presence known. Ines’ blue eyes flew up, her body tensing, but she relaxed when she spotted me. “Oh, it’s you.” She wiped at her tears quickly, avoiding my gaze. I closed the door before I walked over to her and sank down on the small poof she usually used to prop up her feet while reading.

“What’s the matter?” I asked, forcing my voice to remain calm even as my worry and protectiveness made it difficult.

She fumbled with the pages of her book, swallowing hard. “Father decided to whom I’ll be given in marriage.”

Ines was sixteen, so it was time to make that decision. That Father had put it off for so long was only because it gave him leverage. The tremor in her voice raised my worry. “Pietro asked for your hand.”

He was a good choice. He was a quiet, restrained man, unleashing his dark side only when required, like me. I had a feeling he’d keep it well contained in a marriage.

She nodded then threw herself at me. After a moment of shock, I wrapped my arm around her shoulders. “Ines, tell me what’s the matter. Now.”

“He’s giving me to Jacopo Scuderi!”

Tension radiated through my body. “What?” I growled.

Ines sniffled, her tears soaking my collar and my throat. She didn’t stop trembling and shivering. I’d never seen her like this, but given what she’d revealed, it seemed the appropriate reaction.

Jacopo and I had worked together often in the past, not by choice on my part. Father wanted me to work with the Scuderis seeing as they were his Consigliere’s sons, but I abhorred Jacopo deeply. He was a cruel, vengeful being that thrived on demeaning people he considered less—women, low soldiers subject to his command, and his younger brother—and while I was a cruel and vengeful man, I didn’t find satisfaction in humiliating others, least of all women.

The few times I’d been forced to visit one of our whorehouses, I’d seen firsthand what Jacopo considered fun. I’d heard even more horror stories from his younger brother Rocco whenever he had been drunk and unable to shut his big mouth. Jacopo was a sadist, in bed and otherwise. I couldn’t imagine Ines knew the extent of his depravity, and yet she knew he was the worst choice.

Stifling my fury, I said, “Are you sure it’s decided on? Father didn’t tell me.”

Ines pulled back, her eyes full of misery. “It’s settled. He told me this morning right after his meeting with the Scuderis.”

I nodded, realizing why Father had made his choice. It was because I’d refused to marry anyone but Carla. I’d defied him and he’d realized he had no way of forcing or punishing me, so he’d finally given in to his Consigliere’s demand. Father knew what kind of men the Scuderis were. He knew what kind of man Jacopo was, and yet he gave Ines to him. He’d more than once dangled my sister’s fate over my head.