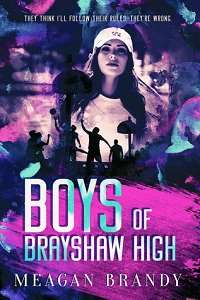 Move your feet, exit this piece of shit cafeteria, and go get high. Chill out.

I keep walking, and I’m almost free and clear, almost through the door and away from the trouble I surely don’t need but can’t seem to escape.

But of course, nothing in my life is simple and just before my left foot joins my right, the final step through the open door, the bitch decides she’s not done and runs her mouth. Again.

“Maybe if she wasn’t such a slut her whore mom wouldn’t have kicked her out for sleeping with her new man.”

The laughter echoes, growing louder until it wraps around my throat like my mother’s hands when in a fit, choking me until I lose focus.

I stop where I stand.

My eyes haze, rage winning over the calm bravado I attempted to force myself into.

And there it is, the push.

Why do they always push?

Before anyone can stop me, not that there’s anyone who would give a shit to, I snatch the closest tray off the nearest table and in one swift move, one hard, full swing, smash it across the side of her face.

The cheap red plastic breaks against her head and screams ring around me.

Blood pours from the big mouthed bitch’s forehead and she shrieks, her horrified gaze flying to mine. I wait until our stares connect, then quickly kick her chair sideways. Panic grows in her eyes as she crashes to the floor.

There’s no time to escape, not that I have anywhere to go.

People scream, but no one dares to step closer to me. The lunch lady calls for help and everyone rushes to the asshole on the floors side because she’s ‘the victim.’ Sure, I got physical first, but she started it. What did she expect?

And, yeah, the spat wasn’t a lie, my mother is a whore. The dirtiest of dirty. Straight trailer trash at its finest, I’ll admit it all day.

But she doesn’t get to say it.

And I sure as shit couldn’t let her get away with disrespecting me the way she did, publicly.

Not sure how she managed it, but my mother, the failure she is, taught me one thing - to keep my pride above all else.

Apparently, that’s all a girl like me can control.

So disrespect me not.

“My office! Now!” Principal Folk screeches. He doesn’t call me by name, doesn’t look my way, but why would he? Here I stand, caught red-handed - literally still holding half of the tray in my hand - as always.

He probably knew it was me the second someone called for help, before even walking in here.

I toss the tray to the floor and head straight to my home away from home - the cheap wooden chair with a ripped-up burgundy center that sits directly across from the principal’s desk.

Monday was, as he warned, my “last strike,” but yesterday I got caught smoking behind the gym, and I’m still here. Today’s Thursday.

Wonder if he’s in another forgiving mood?

I’m guessing not when forty-five minutes later he charges in and slams himself into the seat, glaring at me through his little nerd glasses.

His anger probably has something to do with the loud mouth girl – who very well may still be bleeding all over the stark white cafeteria floor – being his niece.

His eyes narrow as he judges me and my too-tight top and ripped-up jeans.

So I smirk, taunt him a bit.

Because there’s nothing this guy could say or do that could possibly be as fucked as every other day in my reality.

I grab the edge of the chair and lean forward. “Give it to me, Mr. Folk.”

His eyes widen a fraction of an inch and as if he can’t help himself, quickly cut to my top.

Men, they have no self-control.

Well look at that, another thing learned from my mother.

“Clearly you don’t want to be here, Ms. Carver. Every time I issue a warning you come back twice as hard.”

When a slow grin stretches across my face, he clears his throat and looks away.

“This is your third high school in eighteen months and honestly, you’re lucky you lasted here so long.”

“Stop.” He glares before sighing. “This is serious. You’ve got the entire school’s attention now. I can’t make this go away.”

I roll my eyes. “Just get on with it already. Where to next?”

He eyes me a moment before folding his hands and leaning forward against the desk. “I made a call.”

My eyes slice to his.

“I don’t have a social worker.”

“Apparently you do. She contacted me a few months back and—”

Right then, the secretary ushers in some dark-haired lady wearing slacks and a button-down. She reaches over the desk to shake the principal’s hand.