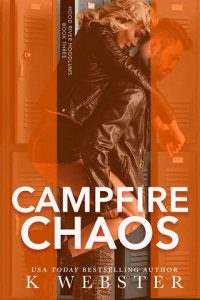 I wanted to kill him.

My blood boils when I think about him, but seeing him today completely did me in. It took everything in me not to whoop his ass. He knew it too, which is why he left the restaurant where Mom, Dad, and I were sitting, the moment our eyes locked.

What he tried to do to Roux…

If only Jordy knew. His ass would be back in prison before he could utter his next word. I hate keeping shit from the other Hoodlums, but Roux was right on this one.

Neither Jordy nor Roan can know.

And when he finally gets his ass here, we’re going to make a plan to destroy Wes. I have a few ideas up my sleeve, but I need my best friend’s help. I’m going to turn that smarmy motherfucker’s world upside down one piece at a time.

“Slow down, Momma. I’m gonna lick your pussy to get you nice and juicy for me.”

What in the ever loving fuck?

I do not want to hear Jordy plow Little Hoodlum into next week.

“I can fucking hear you, assholes,” I yell at them through the cabin door.

Roux giggles and the door thumps. Ignoring them, I text Terrence.

Me: Dude, get here and save me. You have no idea how weird it is to see them together.

“Hey, Cal,” a girl with big tits and long-ass hair calls out from near the bonfire that’s blazing not far from the cabin.

I lean back in my patio chair and admire the view. I’m pretty sure this chick’s blown me before. Tayla or Tara. Something with a T.

She’s pleased that I at least got some of her name right because she starts walking my way, swaying her hips. T Girl must have not been too memorable because I don’t remember anything about her except her mouth. She’s got a nice body, though. I might be okay with dragging her back to my tent later to fuck.

Before she makes it over, my phone starts ringing. I answer on the first ring.

“Ter, buddy, I’m about to abandon your ass for a piece of ass.” I chuckle, grinning at T Girl.

All humor drains away as Hollis’s shaky voice starts rambling about an accident. His sister. Not the younger one. Charlotte.

“Is she okay, man?” My stomach twists into a knot.

“Roan’s calling me back,” he rushes out and then hangs up.

T Girl is trying to climb in my lap now that I’m off the phone, but I shake my head at her.

“Not now, Teresa,” I grind out, storming over to the cabin door.

I knew it started with a T.

“Jordy!” I holler out and then start beating on the damn door.

The moaning stops and I can hear them thumping around, probably getting dressed. Moments later, Jordy emerges, his clothes crooked and violence shining in his glare at having been interrupted.

“What the fuck?” Jordy snarls.

Horror washes over his features. “What happened?”

“Hollis called me,” I croak out. “Roan and the other responders are just arriving on the scene. It’s Charlotte’s car. She got in a really bad accident. That’s all I know, man.”

Roux rushes out, grabbing onto Jordy’s hand. “What? Charlotte’s hurt?”

“I don’t know, Little Hoodlum. He said he’d call me back.”

As Jordy comforts Roux, I dial Terrence. He doesn’t pick up. I told him to come straight to Campfire Chaos, but knowing his pussy ass, he stopped off at his grandma’s first.

Minutes feel like hours as we wait for Hollis to call back.

The second my phone rings, I answer.

“Is she…” Dead? I can’t say the word with Roux watching me, tears in her amber eyes.

Ice surges through my veins. “Spit it the fuck out.”

I freeze, trying to understand his words. “What’s Terrence?”

“The other car…” He pauses as my heart pounds like a war drum in my ears. “They don’t think he’s going to live. He’s been life flighted to—”

The phone slips out of my hand, hitting the wood deck with a loud clatter.

Not my best friend since kindergarten.

I wake to voices.

I’m reminded of when I was a little girl, still haunted by the dregs of a nightmare. Back when my parents were happy and in love. They crawled into my bed, hugged me tight, and promised they’d keep the monsters away.

Yet, as I blink my eyes open and see them both clutching onto my hands, I can’t help but have hope again. Just like when I was six years old.

Mom’s eyes are closed and her face is puffy from crying. Dad’s forehead is lined with worry as he frowns. Neither is looking at me, just holding my hands, lost in their own world. I wish I could pretend everything was a bad nightmare. That Mommy and Daddy will keep me safe. That tomorrow I’ll wake up and we’ll go get ice cream with Hollis and Penny.