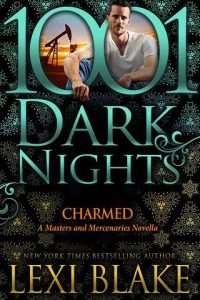 and I had read that by the time he met Scheherazade,

Nina Blunt bit back a groan at the words and held her hand up to indicate to the bartender that she was definitely going to need another glass of wine. She adored Sandra Croft, the woman sitting beside her at the bar, but sometimes she could be a lot to take. She’d met Sandra months before when she’d shown up at the London office of McKay-Taggart and Knight with her daughter and granddaughter. Like many people Nina knew, Sandra was ex-military, and it showed in her no-nonsense, take-no-prisoners style of conversation.

“I’m not here to get laid. I’m here to do a job, and that job starts tomorrow afternoon,” Nina pointed out, sliding her empty wine glass forward so the bartender could pour out some more Pinot Noir.

Sandra turned in her chair, her hand on the beer she’d ordered. “When was the last time you got laid? I’m thinking it’s been a couple of years. Fess up. I’ve got a bet on this.”

This rarely happened in London. There was a reason she didn’t come work for the Dallas team often. Ever, really. It was her first time working directly with Ian Taggart’s team, and this was what she got. “It’s absolutely none of your business.”

“I totally disagree. I have to go undercover with you. I’m your backup. I need to make sure my girl is loose and ready to rumble. I’ve got some thoughts on hookers.”

Sometimes with Sandra she just had to go with it. Often with Sandra, things got so over-the-top awkward it was amusing. “I think they’re called gigolos when they’re male.”

Sandra shook her head. “I refuse that terminology. Look, a doctor’s a doctor whether said doc has lady bits or dangly parts or anything in between. A pro’s a pro. If there’s one thing my daughter’s generation has right, it’s sexual fluidity.”

Sometimes it was utterly fascinating to watch Sandra go. It was one of the reasons she was kind of excited about the upcoming job. Sure, it was a fairly simple catch-the-corporate-spy-in-action job that she’d done a hundred times, but Sandra was her backup and that meant the world might explode. “So you think I should call up an agency and tell them I’ll take whatever they send. Girl parts. Boy parts. Doesn’t matter.”

“I’m only saying these people are professionals and strap-ons exist.”

The bartender nearly dropped the bottle of wine she’d been pouring. That happened a lot around Sandra. The woman had no filter and absolutely no fucks to give. Still, she had to smile. Many good things had come out of the mission that had finally brought the Lost Boys full circle, but meeting Sandra had been a blessing to Nina. Sandra had become her friend, and she needed a friend who took no bullshit and told no lies. It was refreshing, even if sometimes challenging. “Well, I will certainly keep that in mind if I feel like I need a good snog.”