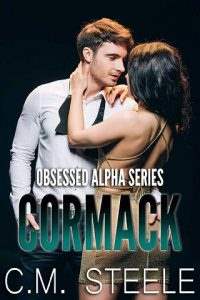 My salvation drinks at a pub I own, one of many establishments the Delaney Family possess throughout Dublin. I watch her nervously twirl her finger around the glass of wine. I can tell she’s not from here. The look in her eyes screams tourist, but where is she from?

She doesn’t see that she’s just caught the attention of the most dangerous predator and I’m not talking about the asshole creeping closer to her.

“I’m sorry,” she mutters when a man intentionally bumps into her. The way she tucks her shoulders inward as a protective mechanism. I watch the fucker and snap my fingers, nodding to my men at the door. If he thinks that shit’s going to work he’s got another thing coming. Not only do I not allow thievery in my businesses, but I also won’t allow anyone to get that close to my woman ever again. Whoever she is, she sealed her fate walking into my pub, looking so fragile. She needs me to protect her like I always will.

A pain in my chest develops as I consider just forty-eight hours ago, I got the news that my father passed away. It came suddenly, almost as if he was murdered, but there’s no proof. It hit me so damn hard that I’ve been in a dangerous fog that could get me killed. Still, I let that cup of emotions sit because my attention is back on the enchantress perched on the stool. She’s focused on the bastard that bumped her and pick pocketed her pocketbook out of her bag.

“I’m not interested. Leave me alone,” she says with grit and power that I love to see.

“For the right man.” She pauses, looks him up and down before adding, “and that’s not you. Get away,” I hear her American accented rebuttal with pride in my chest. I haven’t narrowed down where she’s from, but the accent is familiar. It screams Chicago, but I could be wrong. I’ve been there several times on business over the past ten years, so maybe that’s why it’s ringing a bell. Still, I inch closer to her as my guys yank him away from her. They don’t make a scene, but he does. “Hey, I didn’t do anything. She’s the slut who started it.” Does he understand that he’s about to meet his maker? Well he is. There are things that are intolerable to me and number one on that list is disrespect. I don’t kill every drunken fool who disrespects my establishment. His mistake was not only touching what’s mine but insulting her as well.

I intercede, stepping up to him and snatching her wallet from his filthy grip. “Take him away,” I order my men. He looks at me and pleads, but it falls on deaf ears. With my back turned to her, I open up her wallet and see her name, Gloria Anabella Grasso. Like I thought, her ID says she’s from Chicago.

“Oh my God. He took my wallet,” she gasps, spinning in her chair. I turn after having closed her wallet.

“Here you are, Gloria.” I slide it onto the bar top next to her drink, and then her eyes meet mine for the first time. She gasps, clutching the small wallet

“How do you know my name?” I point to the stolen property.

“Oh, wait, did you have him do that?” Her eyes narrow with the proper amount of suspicion is justified, but it still makes me chuckle.

“Sweet, Gloria. I would never stoop that low to meet my future wife. I would just introduce myself without pretense.”

“What? Tossing on the charm, aren’t you?”

“I’m just stating the truth. Now let’s go take this to the back, over there.” I point to where I had been sitting.

“No thank you. I should be going,” she says, grabbing her wallet and stuffing it back in her purse, zippering it this time.

“Then I’ll escort you home,” I offer. It’s not my end game, but I’ll play along for now.

“I’m not from here which you clearly are aware of, so home is a long way away,” she says, intentionally being obtuse. I want to kiss that smart mouth so much that I can’t take my eyes off her lips. Would she talk to me like that if she knew who I was? I’d sure as fuck hope so.

“You’re beautiful,” I mutter, lost in her eyes to the point that I’m coming off like a total ass not unlike the piece of shit I had taken out of here.

“Thank you, and do you plan to tell me your name or do you think I’m just going to marry a complete stranger?” she teases, making the growing tension fade that she might not be as interested as I believed.