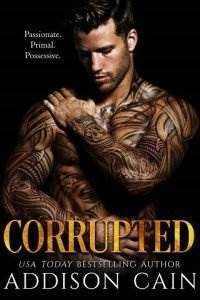 Awakening to the most glorious feelings of delight, Brenya smiled, nestling closer to what made the world perfect and new. Warm and protected, surrounded in scent, everything was lovely .

Fingers tripped down her spine, a satiny purr moving through her.

Fulfillment, conquest. Triumphant emotions stronger than any she’d ever known brought a satisfied flush to her cheeks and made her hum.

Until she realized they weren’t hers.

Sucking in air as if suddenly drowning, finding her body was not floating but actually in a great deal of discomfort, Brenya mentally flailed in the river of another person’s emotions.

It hit her stronger, the alien sentiment. It swept her panic aside as if her own much weaker feelings were meaningless.

Finding herself back in his rooms, in his bed, naked, was shock enough to stop the heart. Realizing none of those wonderful feelings had been real, broke it.

This was not right. She was supposed to be free. She’d gotten out, flown a craft. Why was she not in Thólos repairing their Dome?

Someone was inside her skin, and though she held her fingers up before her face and found she could control them, the invasion was there all the same.

“Take a deep breath.” Jacques’ hand came to her chest. When she obeyed, he added, “Good, now take another.”

Calm—he was inundating her body with manipulative calm.

Brenya’s next blink led to warm drips marking her temples. Staring up in horror, she whispered, “What have you done to me?”

Leaning over, his golden hair loose and spilling around her face, Jacques smiled. Brushing his lips over her eyes, he kissed away her tears. “Made you mine, Brenya. You’re mine completely now. My pair-bonded mate.”

Estrous, the ship, bottles of water rolling over the floor… the Beta warning her not to open the door.

The memories were foggy with only flashes she might piece together, but a thrusting body had been on top of her. Someone had saved her from the pit of hell. Or had they dragged her to it? “It was you….”

“I was only a few hours behind you.” Some of the Alpha’s triumph was replaced with dangerous resentment. “You would have never made it, you know. That vessel was no match for the speed of my ship. I have an army of Alphas conditioned to throw themselves to their deaths on my order. Not a single one even questioned a mission that drew them from the safety of the Dome. I would have invaded Thólos myself if I’d had to.”

And some of those Alphas had watched what she was beginning to remember. Shame formed in the pit of her stomach at the flashes of soldiers clad in bio-suits guarding the cockpit door.

Another with unnaturally vibrant blue eyes licking his lips as she moaned her release.

Cold, Brenya tried to turn to her side to shiver against the mattress. Jacques allowed it, settling against her back to toy with her hair and continue his internal gloating.

“I sense your dissatisfaction.” Amazed, he scoffed at the back of her head. “You mistakenly believe that I will hurt you. I can practically read your thoughts, naughty girl.”

This was a nightmare beyond comprehension, Brenya whispering, “Don’t.”

“And now you’re scared, worried, lost—internally reaching out for your mate to comfort your fears. As you should.” He rewarded her by forgetting his anger and filling her with his joy. “I never want you to feel afraid of me.”

His manipulation was so outright, she could hardly resist.

“You don’t believe me,” he spoke what he sensed, even daring to sound surprised.

How could she? Tears fell in earnest as the truth sank in. “You’re going to kill George.”

“No, mon chou.” His denial was echoed with raw internal confirmation. “The Beta is meaningless at this point.”

Daring to glance over her shoulder despite a shooting pain that followed, she gave him a pathetic “No?”

He kissed her red nose and smiled. “Don’t cry. I don’t want you to fear that there will be any retaliation for your recent… hormonal behavior. You were punished and are forgiven.”

She was humiliated. She was tired. And she was guilty of much more than hormonal behavior. “What’s going to happen to me?”

The arm around her middle tightened as Jacques pulled her flush to his body. “I’m going to make you feel better.”

Husky, he chuckled. “I don’t doubt it. In estrous you were a very greedy girl.”

Estrous had been awful, and had left her wasted, body and soul. She never wanted to think about it again, any of it.

Jacques was not going to allow that.

“You were glorious through all of it, even when you refused to behave. It was the necessary choice to make, and had I not loved you so much, I never could have abided sharing… but it was exciting watching you take us both at once. Feeling another inside you next to me, hearing you come undone.” Rubbing his thickening cock between the cheeks of her ass, he whispered, “I came harder than I ever have before… and Gods, so did you.”