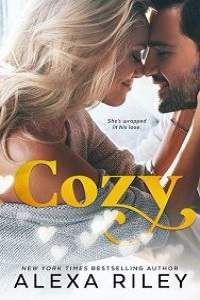 “Sooo.” Myra drags out the word to get my full attention.

I gaze up at my sister who’s still dressed to kill. I don’t know how she does it. Every morning she gets up, does her hair and makeup and puts on a kickass suit or dress and rolls around in heels like they’re slippers. I look at her now with her blond waves up and not a hair out of place. Her makeup from this morning is still flawless and you’d have no idea the woman ran her butt off at work all day. Myra is one of the hardest working people I’ve ever met in my life, but too bad she has a jerk of a boss that has no clue how much she does. He works her too hard.

I heard her come in a few minutes ago, but when she first gets home I always give her a moment to unwind. But this time she comes straight to the living room to find me and her “sooo” puts me a little on edge. Something is up.

“So?” I prompt her to continue because I know she wants something from me.

She’s acting as though whatever it is she wants me to do, I'm not going to say yes. When it comes to my older sister there isn't anything I wouldn't do for her. She’s more than a sister to me; more often than not she slips into the mother role. We’re only seven years apart but for as long as I can remember she was the one who took care of me. She graduated top of her class in college while working all the way through. She made sure the bills were always paid so the power wouldn't get turned off on us because we all knew Mom wasn't going to do it. Our mom wasn't there most of the time anyway and it was always Myra and me. She’s the one person I can always count on and if there’s ever anything I can do for her, I will. Without question.

On my eighteenth birthday we were out of my mom's apartment the second I opened my eyes. That morning Myra pulled me from my bed and packed our bags. She already had us a place and we were leaving the past behind. That was over two years ago and it’s been just the two of us since.

“I need a favor.” She steps out of her heels as she says it and lets out a soft sigh.

“I’ll do it.” I put my knitting needles down to give her my full attention.

I’m almost done with the mittens, and unlike my sister, I'm not a busy body. She constantly needs to be moving and doing something while I could sit on the sofa all day and knit. At the moment it’s because I have four applications in for jobs and I’m waiting to hear back from one of them. There isn't anything else for me to do, so why not pass the time crafting winter accessories?

Her shoulders drop and her lips purse. “Don’t agree to things before you know what they are,” she scolds. I do have a bad habit of agreeing to do just about anything. If someone asks me to do something, I can’t help myself. I’m always eager to help my sister, as long as it isn’t against the law.

I move my knitting stuff and pat the sofa next to me. Our very nice sofa at that. When Myra graduated from college she got offered a job at Cox Investment. She went in to interview to be a secretary but somehow she ended up getting the job of executive assistant to the CEO, Mr. Cox. I’ve never met the man but he keeps my sister busy. I swear the man never wants her to come home. He’s always trying to keep her at the office, and then other times I think he’s trying to get her to quit. I swear I don’t know if he likes her or hates her. Men. This is why I stay away from them. It probably doesn't help I saw way too much of my mom’s dating life growing up and I’ve decided dating isn't for me. What is for me is knitting.

Myra sits down next to me, letting out a long sigh. “He’s asked me to do the impossible.” She drops back onto the sofa.

“I don’t believe there is a thing you can’t do.” I raise an eyebrow at my sister. The woman is unstoppable. I wish I had half her drive. She’s always known what she wants and goes for it. I’m a drifter who sort of lets things happen. My job applications range from vet tech to working in a library. I have no idea what I want to do in life, I just know it’s not working in a restaurant. The poor owner of 68 Diner tried me as hostess, server, busser, dishwasher, and even doing some prep cooking. I failed at them all because high-stress situations and I do not mix well. I explode under pressure and make things ten times worse. When too many things are on my plate I fold like a cheap chair.