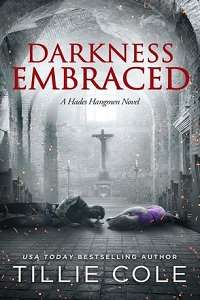 “Tanner, can you show Rafael where we keep the pens and pencils?”

I nodded my head and walked to the stationery table. A boy with dark hair came beside me. I pointed to the pens and pencils like Mrs. Clary said.

“You just take what you want, then bring them back when you’re done.”

Rafael lifted his head. “Thank you.”

I frowned when I heard his accent. It sounded weird.

He didn’t know he sounded different? I looked around the class. Everyone had white skin. He had brown. “You look different to all of us as well.”

Before he could answer, Mrs. Clary came over. “Everything okay here, boys?”

I nodded. So did Rafael. “Tanner, can you be Rafael’s buddy today? Let him sit with you at lunch and at recess. Show him the ropes here at St. Peter’s?”

I led Rafael back to the table I sat at. The other kids didn’t seem to notice his skin color. My nanny, Mrs. Murray, said that any skin that was darker than white was a sign of inferiority. I didn’t know what that meant, but Rafael seemed nice. I didn’t see anything wrong with his skin.

He spent the whole day with me. When the bell rang for the end of school, I walked out of the main entrance with Rafael. His papa was waiting for him outside. He was dark like Rafael too. I’d never really seen anyone like them before.

Mrs. Murray got out of the car as the three of us walked toward her. She smiled at Rafael and his papa.

“Rafael tells me Tanner looked after him today,” Rafael’s papa said. “I just wanted to say thank you. It’s been hard on Rafael leaving Mexico. Your son made starting a new school easier on him.”

Mrs. Murray shook Rafael’s papa’s hand. “Tanner is a good boy. I’m glad he was a help today.” Mrs. Murray looked back at me. “Come on, Tanner. We must get you home.”

I waved at Rafael, then climbed into the back seat. My brother, Beau, was already in his car seat.

Mrs. Murray leaned over me and belted me in. “Ow!” I said when she gave my arm a sharp nip. She didn’t say anything.

When we pulled away from the school, I waved at Rafael and his papa. Beau reached out to give me his toy car. As I took it, Mrs. Murray said, “Did you like that boy, Tanner?”

“Yeah, he was nice,” I said, then gave Beau back his car. Mrs. Murray was watching me in the car’s mirror. My stomach flipped over. She looked angry. “He told me his papa is a doctor. They’ve come from Mexico. His papa got a job at the hospital downtown.”

Mrs. Murray didn’t say anything to me after that. So I played with Beau until we got home. I climbed out of the car and went inside. I sat at the table, had my snack and did my homework. Mrs. Murray disappeared for a bit, but then came back when I was done. “Go change, Tanner, then stay in your room. Your father will be coming over tonight when it’s dark.”

“He will?” Excitement built in my chest. I hadn’t seen Papa in a long time. He worked away. And he was a secret me and Beau had to keep to ourselves. We had to keep quiet about who he was to us. To keep us safe from bad people who wouldn’t like us. Even at school I had to pretend I didn’t know him. People at school thought my name was Tanner Williams. But I was really an Ayers.

I went upstairs to my room and changed. As I did, I noticed there was a book on my bed. There was a boy on the front. He had dark hair and dark eyes like Rafael. But his clothes were all torn and dirty. Rafael’s clothes hadn’t looked like that. He’d looked just like the rest of us.

I dropped the book when the door to my bedroom opened and my papa stepped through. I smiled and ran to him. But his hands came out to my chest and stopped me. It hurt and I rubbed my chest. I looked up at him. Papa walked around me and sat on a chair. I didn’t like the way he glared at me. It scared me. My papa could be real scary at times. I never liked to disappoint him or make him angry. He would use his fists on me if I did.

It hurt so much.

“Mrs. Murray told me you made a new friend today.” I nodded. “She said that he was from Mexico.”

Papa got to his feet, then he came toward me. I stood still, not daring to move. My hands started shaking at my sides. My legs felt like jelly, and there was a funny feeling in my stomach, like a million butterflies were flying around.