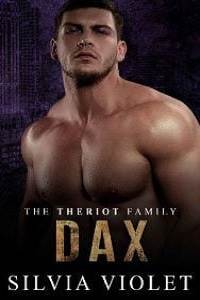 “I can take him home with me. I’ve got plenty of room.” The words tumbled out before I’d thought them through, but Travis looked so damn hurt I couldn’t help myself. He’d shown up to save his brother, and he was afraid he’d be sent away. I couldn’t let that happen.

No matter how much he’d done to hurt Beau, I still remembered Travis as the sweet boy he’d been when I’d first met him and his brother. I hadn’t seen Travis in years, though, and he sure as hell wasn’t a boy anymore. He was all man, all fucking gorgeous man, but I would never take advantage of that. He was my friend’s little brother, and he had a lot of healing to do. I would offer him a room and food and absolutely nothing else, no matter how attractive his shy smile was when he glanced at me.

“You remember Dax, don’t you?” Beau asked. I know you only met him a few times, but I promise he’s trustworthy.”

I hoped to hell Travis remembered me, and we’d all hung out more than a few times. Did Beau think Travis had been too young to remember our earliest meetings?

Travis nodded, then glanced at me. Was I imagining the appreciation in his eyes? What the hell was that about?

He looked away again and mumbled, “I guess that’s… okay.”

Was he scared of me? Could I really blame him if he was? How much did he know about the man I’d become? I didn’t want him to be scared, though, so I decided he thought I lived like my brother. “I have real plumbing and everything,” I assured him. “I wouldn’t last more than a day with Ambrose.”

Travis smiled, and I instantly felt better about the whole situation. Beau had promised him I was trustworthy, and I would show him I was. Beau talked to his brother like Travis was a wounded animal. I was a monster but not enough of one to take advantage of someone in Travis’s position. I’d give him food and shelter like I would anyone in need. That was as far as things would go. He and Beau had a long way to go to repair their relationship. Travis had proven himself today, but what did that mean for the future? Whatever it was, my dick wasn’t going to be involved.

“How did you get here? Do you have a car or anything you need to pick up?” He was carrying a backpack, but it couldn’t hold much.

I assumed that meant the car was stolen, but that was the last thing I cared about.

Travis was mostly silent on the ride to my house, only speaking when I asked him direct questions like whether the AC was cold enough for him. I didn’t mind. I wasn’t a person who needed a lot of unnecessary chatter.

When I turned into my driveway, Travis spoke up. “What are we doing here?” He gestured to the Garden District home in front of us.

I put the car in park and looked at him. His eyes were wide, and he was glancing back and forth between me and the house. “This is your house?”

“Yes. Is that so impossible to believe?”

“I just… I thought someone like you would… I don’t know. I’m sorry.”

“Someone like me? A mobster? A badass? I can’t have a nice house?”

“Nice like a mansion or some shit, yeah, but this is… cute.”

“Fuck right it’s cute, and it’s a bitch to maintain. It was built in 1875, and as soon as I get one thing fixed, another breaks.”

“So you’re remodeling it?”

I shook my head. “I’m preserving it. If I wanted some modern-ass abomination, I would have bought one.”

“Couldn’t you… um… hire someone to do the repairs.”

I snorted. “Trust someone else with my place? Trust them not to fuck it up? No thanks.”

“Okay, now that sounds like you.” He was clearly trying not to laugh.

“Tell me more about what you think of me?”

Travis chewed his lip and stared at me. “I… um…”

What was I thinking? He was scared, and I was putting him on the spot because I liked that he had an impression of who I was. It told me he did remember me. I wanted him to know me. “Never mind. Let’s get inside. I’m starving.”

The tension went out of his shoulders. “Me too.”

I studied him closely. “When did you last eat?”

“Um… yesterday some time. I don’t really know. Beau left me plenty of food and all, but I… I’ve been”—he ran a hand through his thick wavy hair—“not feeling so great.”

I’d see that he ate and send him to bed. If he still felt bad after he woke up, I’d call a doctor to come look at him whether he liked it or not. I wasn’t going to let him suffer.