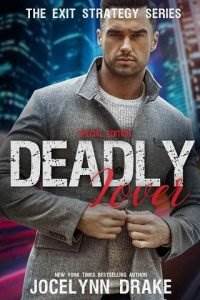 There was still time…

Heavy footsteps pounded across the hardwood floor, followed by the slam of the garage door as it shut behind Kevin. He raced across the kitchen, not bothering to flick on the lights as he maneuvered around the marble-topped island toward the narrow hall. He needed to get to his private office.

The dim work light over the stove created grim shadows, but he ignored them, focusing only on the task ahead. Sweat trickled down his brow and left his shirt sticking to his frame, seeming to grow more constricting with each movement.

Kristen’s wide, frantic eyes flashed through his mind. She’d grabbed him, warned him they were being watched. Her slender fingers had bitten into his arm like talons, and he’d only wanted to shrug her off, walk away, and claim that it was paranoia riding her overworked and exhausted mind.

She was dead now.

His own access to key data files had been cut off at work. The IT department claimed it was an unknown malfunction and they were working on it, promising to have it fully restored tomorrow. But Kristen’s desperate words didn’t sound so paranoid anymore.

Reaching his desk cluttered with dirty coffee mugs, notes scribbled on scraps of paper, and other flotsam, he jostled the mouse, waking the computer from its slumber. The dual monitors flicked on, revealing a login screen. Kevin didn’t bother to sit as he typed in the first password to decrypt the hard drive and then a second password to get into the actual operating system.

If he could just upload all his new data to the cloud, he’d be able to access it from anywhere. He could finish his report while on the run and present his data to the world. He’d be safe. There would be no reason to come after him then.

A soft creak echoed through the silent house, barely drifting above the clatter of keys and the frantic beating of his heart in his ear. Kevin stopped, trembling fingers hovering just above the keyboard. The house was new—barely five years old. There were no sounds of shifting and settling.

The creak had come from a particular floorboard near the fridge. He’d hit it a hundred times on the trek between his office and the kitchen to get a bottle of water or a mug of coffee as he worked late into the night on his research.

He wasn’t alone in the house.

A sob tried to break past his clenched teeth, coming out as more of a muffled moan. Blinking, he looked at the monitors to find them blurred and unreadable. Unshed tears burned his eyes.

He was out of time.

The man’s face was swollen, covered with ugly purple and blue bruises, so that he was unrecognizable. Not that Justin would have recognized the corpse anyway. He’d never met Dr. Kevin Weiss. The biochemist had been badly beaten before he’d finally died of a vicious blow to the back of his head.

The next picture showed a living room that had been torn apart. Stuffing poured from shredded sofa cushions, broken bits of coffee table lay scattered around the room, and holes pockmarked pale-tan walls. And in the center, the doctor’s limp body was awkwardly sprawled in a large pool of blood.

The local news had claimed the scientist had the poor timing of coming home during a burglary attempt.

“So…I’m guessing the reporters got their story wrong,” Justin drawled, lifting his eyes to the woman sitting opposite him in the small booth of the crowded coffee shop.

Marilyn lifted one sleek eyebrow at him, her plump red lips twisting slightly as if she were trying to decide whether to deliver the first cutting barb that came to mind. Dressed in a lilac blouse and white capri pants, she portrayed the perfect image of a middle-class suburban mom. But a hardness in her dark-brown eyes whispered of a past that most knew nothing of. Not even Justin, and he definitely preferred it that way.

Justin hid his smirk behind his coffee mug as he took another sip. It was so fucking easy to irritate her. Marilyn would never have called him if the police were already on the right track with this one.

“Do you know anything about Iaso Health?” she asked, tapping her manicured nails on the table. Her firm voice was pitched just loud enough to reach him above the steady clatter of noise filling the busy coffee shop while not drawing anyone else’s attention.

“Big Pharma headquartered in New England with a research facility up in Blue Ash,” he quickly replied, referring to the quiet suburb located just to the north of Cincinnati, Ohio. “They have their fingers in drugs to treat a variety of diseases, but their big moneymakers over the years have been in psychopharmacological and diabetic drugs.”

Marilyn nodded. “Dr. Weiss was one of their lead developers. Rumor has it he was part of the Siltryptrose development that is expected to receive the FDA’s stamp of approval any day now.”