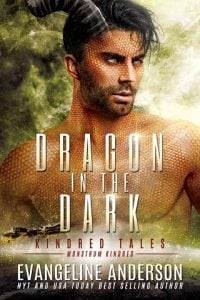 Dr. Iyanna Washington’s eyes widened as she looked around her suite of rooms aboard the Monstrum Mother Ship. Her new living quarters were beautiful—there was no denying that—and more than that, they were unique.

Everything she saw seemed to have been grown rather than made—from the big, overstuffed couch sprouting from the moss-carpeted floor to the pictures, made from living blossoms woven together, that were growing on the walls. There were no light fixtures but the room didn’t need any—it was lit with more flowers that gave off a gentle glow and hung from the curling blue-green vines that covered the ceiling.

The effect was like being in the middle of a tropical rainforest and it was a dream come true for a botanist, which happened to be what Iyanna was.

But she couldn’t be perfectly happy—despite her amazing surroundings—the past was weighing too heavily on her for that.

“These will be your quarters while you stay with us,” a deep, rumbling voice said from behind her. “I hope they are sufficient?”

Iyanna gave a little jump—she’d almost forgotten that Chief Commander Rarev of the Monstrum Kindred was behind her. He was around seven feet tall, as all Monstrum Kindred were, and he had features that made him look rather like a man crossed with a lion. Wide golden eyes and a flowing golden mane gave him a majestic appearance, though his body and hands and feet were all humanoid. He was wearing a tailored uniform and tall black boots that made him look imposing.

Iyanna was five-ten and what her Granny had always called “big-boned,” but even she felt small next to the Monstrum commander.

But at the moment, she’d been so lost in thought, she’d completely forgotten the big Monstrum was there. Really, she had to get out of her own head and concentrate on the present, she told herself sternly.

“Oh, er, yes—thank you. They’re more than sufficient,” she said quickly. “They’re gorgeous.” She looked around the room, taking it in more fully. “Are all your guest suites like this aboard the Monstrum Mother Ship, or did you give me this room specifically because I’m here to study all your unique plants and flowers?”

“They are all very similar to this,” Commander Rarev told her. “Though I have included some extra amenities for you. Your fresher, for instance, is deciduous rather than tropical.”

“My what?” Iyanna asked, frowning.

“I believe you humans call it a ‘bathroom’ or a ‘restroom,’” Rarev answered. “If you’ll come this way, I’ll show you.”

He led Iyanna through the living area and what he called “the food prep area” which had several strange appliances he promised to show her how to use. After that, they came to a short hallway which led to a large master suite.

“That’s a huge bed!” Iyanna remarked, her eyes wide as she stared at the vast expanse of mattress. It must be bigger than an Alaskan King, which she’d only seen on the Internet. And since Alaskan Kings were nine feet by nine feet and she estimated this one was even bigger, it was absolutely the most enormous bed she’d ever seen in her life.

“Ah yes, I’m afraid most of our furniture is sized for Monstrum Kindred, not for humans,” Commander Rarev apologized.

“But this is big even for a Monstrum,” Iyanna protested. “I mean, you’re all at least seven feet tall, but this would comfortably fit someone several feet taller than that!”

“Yes, well…let’s just say that you humans have not seen all the members of our extended family tree yet,” Rarev said evasively. “I would offer to find you something smaller, but I’m afraid this sleeping platform cannot be moved. It was specially grown for this room, from the structural growth mat beneath the moss carpeting.”

“Structural growth mat? What is that, exactly?” Iyanna was instantly interested.

“It’s a type of extremely adaptable fungus which was common to our ‘verse,” Rarev explained. “It and the moss carpeting permeate our entire ship—the roots are actually part of the Mother Ship and help preserve her structural integrity. The mat can be trained to grow and maintain certain permanent and semi-permanent structures such as furniture and bedding.”

Iyanna found this fascinating and immediately wanted to know more.

“So they’re able to grow without direct sunlight?” she asked, going across to examine the bed more thoroughly. When she flipped up the silky green coverlet, she saw that what she had taken for a regular mattress, was actually part of the large wooden-looking frame. It appeared to be a dense, soft mat of tiny, tangled vines and flowers that were no bigger than her smallest fingernail. When she pushed on this living mattress, it had a springy feel, not unlike the more traditional bedding she was used to.

“All any of our furniture needs to maintain itself is the light of our hanging glow blossoms.” The Monstrum Commander gestured to the top of the bed, which was set up rather like a canopy bed with a square wooden frame above it. But instead of curtains hanging from the frame, there were more vines with the softly glowing blue, green, and pink flowers dangling down.