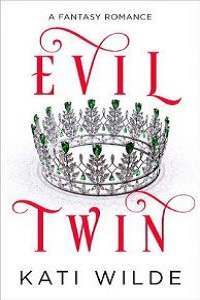 Hi! If you’ve read the description of the book, then you know this story features a twin deceiving a sexual partner about their true identity, which means consent is dubious at best. Some of us can enjoy fiction where the main characters do things that, in real life, would deserve a trip to prison — and some of us can’t. Only you know how well you’ll tolerate romances featuring that kind of scenario, so here’s the heads-up that this story does. In addition, there are:

references to war and battle

violence against fantasy monsters that were once people

emotionally abusive family dynamics, including mentions of forcing a character into an environment where a magical, narcotic-like effect dampened her mental faculties.

On her deathbed, Bane’s mother had made him swear an oath never to kill his twin. But if the good queen had lived to see the waste of air that Tamas had become, she might have let Bane rescind his vow. She might have even put the assassin’s dagger into his hand and bade him to do the job well.

Bane had been but five years old when he made that vow. Over the twenty-five years that followed, each morning Bane awoke and hoped this would be the day that his twin would die.

But that was also not to be. At fifteen, a fall from his horse during a hunt broke Tamas’s arm, not his neck. Though blue fever and the wheezing cough swept through the palace, his brother survived every plague. None of his mistresses ever stabbed him, or smothered him with a pillow, or gave to him a lethal pox. He’d not even the courtesy to choke to death on a grape, as their royal father had when they were twenty years of age—and although grapes were banned from the king’s table from that day forward, enough wine flowed into Tamas’s cup that he ought to have at least tumbled down a stairwell or fallen out a tower window. Yet he never did. And so each night, Bane went to bed disappointed.

But he would not this night.

This night, Bane would claim a throne. But he would keep his vow, and he wouldn’t take his brother’s crown.

Instead he’d take his brother’s bride.

A mere four minutes had determined the early course of Bane’s life—four minutes that had seen him arrive second-born from his mother’s womb and denied him a kingdom.

A mere four seconds determined the rest of his life, for that was all the time Bane needed to devise his plan. Those four seconds took place at supper, in the lull between the soup course and the fish, and immediately after Queen Aveline of Phaira said to him, “Mere words could never express how thankful we are to your brother for sending Gocea’s warriors to defend our people against the undying scourge. I trust that giving to him our brightest jewel will come nearer to conveying the depth of our gratitude, even as it unites our kingdoms.”

Their daughter, Sapphira. The heir to the Phairan throne.

Resentment spewed through Bane’s blood, hot and bitter. When he’d been summoned away from his warriors’ training camp to attend this royal banquet, he’d assumed the only purpose was to celebrate the victory over the scourge. But they also clearly meant to wed Sapphira to Tamas…and in time, his brother would rule over two kingdoms.

Yet it hadn’t been Tamas who’d sent Gocea’s army to Phaira. No, his twin brother had petulantly refused to help their neighbors. No matter how Bane had argued with him—because every Phairan that was transformed into an undying beast would only strengthen the scourge’s numbers and multiply the threat against Gocea—his brother hadn’t relented, whining that his kingdom would be undefended if he sent his army outside Gocea’s borders.

Bane had led the warriors into Phaira, anyway. He had crushed the scourge. He had saved that kingdom.

Yet the Phairan king and queen were giving their daughter to his spineless shitbag of a brother. And by doing so, they were giving Tamas that kingdom, too.

So Bane would leave them no choice but to give the princess to him, instead.

It would be easy enough. Fuck her. Plant his seed. Tamas wouldn’t want her if Bane had her first—and his twin wouldn’t risk claiming a child that might not be his. Not even for a kingdom. But then, his brother was a vain, worthless parasite.

In that respect, Tamas and Sapphira seemed well matched.

Bane watched her now, sizing her up as he would a fortress that he wanted to breach. His first thought upon meeting the princess was that she appeared pretty and lively but also pampered and insipid. Nothing he saw at dinner overturned that impression.