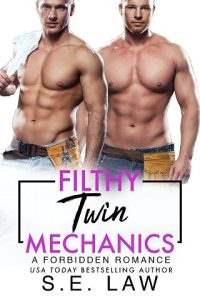 I flop down on the couch and pull out my phone. I just got home from work, and there are things around the apartment I could be doing, but screw the chores. Who wants to do laundry or wash the dishes? I’d much rather have a nice conversation with my best friend because it’s been a long time.

“Hey girlfriend! How are you?”

I sit up a little to get a better angle. Colleen’s adorable daughter, Terry, is sitting on her lap.

Colleen giggles while jiggling her daughter up and down.

“She misses you, so you’ll have to come over soon.”

I blow out a breath.

“I know. I’m sorry life got so busy, but Aunty will be there this weekend! Is that soon enough, Terry-berry?”

“Yeah, sorry it’s been so long, but I really want to see you guys! Terry’s gotten so big! How are you, by the way?”

Her husband, Carl, sticks his head into the frame.

“We’re good,” he rumbles from the upside-down vantage point. His black hair falls in his face and he waves. “Why don’t I take Terry to bed so you two can talk?”

Colleen kisses her husband. “Thanks, I appreciate it, babe. I’ll be in in a little bit.”

I call out goodnight to the baby and then it’s just Colleen and me and she grins conspiratorially.

“So, how was your date last night?”

“What do you mean?” I ask in an innocent voice. She rolls her eyes.

“You mentioned you were going out, and I assume it was with a guy?”

I shrug, trying to appear nonchalant. “Oh that! It wasn’t really a date. Remember that guy, Tyler, I went out with when we were juniors?”

Colleen thinks for a second, and then shakes her head. “Sorry, April, but you had so many boyfriends it was hard to keep track. Seriously, it was like a new guy every week.”

“Oh, shush. I had fun in high school. I’m changing my ways, though!”

“With Tyler?” my buddy asks, her eyebrows raised.

I cringe. “Absolutely not. Tyler was … how do I say it? Well, he’s kind of a let down, to be honest. He graduated a year before us and enrolled in the Army, remember?”

“Yep, yep, it’s all coming back to me now. So he’s here between deployments?”

I shake my head.

“Sort of. The story kind of has a bad ending. Apparently, the military thing wasn’t for him and he was dishonorably discharged. So I guess the military thought he was terrible and kicked him out.”

“Holy shit! Are you kidding me?”

I shake my head.

“No, unfortunately. But Tyler’s back in town now, and he asked me to meet up with him last night. Honestly, I said yes out of boredom and pity more than anything. I don’t have any kind of feelings for him.”

Colleen shakes her head. “But did you find out what he did to be dishonorably discharged?”

“I asked and Tyler said it was bullshit. It was something about him getting caught smoking weed? He was based in Colorado, so he figured it was fine since MJ is legal there, but evidently, it’s not fine with the military so they sent him packing.”

“Well, I guess it’s not as bad as I was expecting. I mean, at least it’s not hard drugs.”

I roll my eyes.

“Still, it’s bad though. I mean, why be so stupid? If there’s even a tiny chance that you’re breaking the rules, you shouldn’t be smoking. And it’s an Army base, for crying out loud!”

“There are a lot of medical benefits…”

I roll my eyes. “Tyler is just dumb, Colleen. He reached his peak in high school, as sad as it is to say. I mean, he was captain of the football team back then and I felt so lucky to be dating him, but now? Uck. I would never consider it.”

“I get what you’re saying. He was hot, though.”

“Yeah, but in retrospect that was one of the only things he had going for him. What happens when he gets old and wrinkly? Age will come for everyone, whether male or female.”

I shrug. “Maybe, but honestly? It doesn’t look like it right now. He’s living in his parents’ basement while looking for a job, but how do you explain a dishonorable discharge to a potential employer? Even worse, I think he’s selling weed on the side, but like an idiot, I think he’s using most of his own supply.”

“OMG, was he high during your date?”

“Sadly, I think so. Not high high like flying in the clouds, but definitely not with it totally. But I have to be honest: we did hook up.”