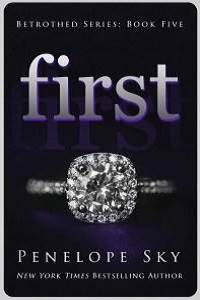 When I rose from my chair, I buttoned the front of my suit. I held the folder of papers in my hand and left my office to head down the hallway. My footfalls were heavy on the hard wood, and my shoes were stiff because they were new. There was a slight squeak in the air, but since they were hand-picked by my designer, I ignored the sound.

His door was cracked at the end of the hallway, and as I got closer, the old rush of feelings returned.

I hated that fucking asshole.

I walked inside when he was on the phone, noticing his wedding ring on his left hand and the watch Sofia gave him. I assumed my old birthday gift had disappeared in the bottom of a garbage can a year ago.

The last time we had a real conversation was when I told him to fuck off and have a good life. We were civil as much as possible, communicating at the bare minimum to get shit done. I tossed the folder on his desk. “These are my numbers for the week.”

Hades stared at me with the phone to his ear. “Baby, I’ll be home in an hour.” He put the receiver on the base and stared at me like I was the bad guy who’d interrupted his extremely important conversation. “Alright.”

It was his turn to do the business accounting, but judging by his attitude, he didn’t want to waste time handling that shit. “I did it last time. It’s your problem.”

His eyes showed his annoyance, but he didn’t argue.

I walked out again and didn’t bother closing the door to the position he liked. Just looking at his face made me want to explode like a volcano. I’d never had a breakup so bitter, a falling-out that landed so hard. Sometimes I thought about leaving the bank just to rid myself of him.

But there was too much money on the table.

My assistant caught up with me in the hallway. “Sir, I have a client who needs to see you.”

I held up my arm and looked at my Omega watch. “It’s almost five. I’m leaving.”

I’d had a really shitty day and didn’t want to deal with any more bullshit. I still had a long night ahead of me at my second job. But my clients were big and powerful, and if it was urgent, it was truly urgent. “Fine. Name?”

“Alright. Send her in.” I went to my office and sat in front of my computer. Her name didn’t ring a bell, so I had to look her up in my system to see what kind of funds she had. She couldn’t be that important. Otherwise, I’d recognize her name.

When I finally located her in the system, it was clear that her husband was the one who made all the money.

A shit-ton of money.

I didn’t recognize him either, so he must be a Hades client.

She walked in a second later, wearing a long-sleeved purple dress with over-the-knee black boots. With curled brown hair that reached past her chest and full lips that looked like pillows, she was not at all what I expected.

She was one of those women who spent a great deal of time perfecting her features, wearing the perfect makeup, styling her hair every morning even though she had to get up at the crack of dawn, and clearly hitting the weights to have an ass like that.

Fuck, I needed to focus.

She approached my desk with her black purse hanging in the crook of her elbow. “Damien, Annabella.” She stuck out her hand to shake mine.

It took me a second to process her professionalism because I’d already made an assumption about her character based on how fucking pretty she was. I expected her to be stupid…shame on me.

I got to my feet and took her hand. “Pleasure to meet you.”

She smiled before she dropped my hand and sat down.

After the initial high passed, I sat down again and tried to pretend she was a man. “How can I help you?”

She crossed her legs and set her purse on the table beside her. Her dress rose slightly, and the outfit was provocative in those boots. The skin of her thigh was lightly tanned and clearly toned. “An apartment that I love has opened up, and if I want to secure it, I need to wire the money tonight. So, thank you for seeing me at the last minute. I appreciate it.”

Why was she buying an apartment? “I treat my clients like family. I’m happy to help you.” I turned back to my computer. “How much money are we wiring for the transaction?” I found it odd that her husband wasn’t here and that she didn’t mention him, but my clients came here because of our discretion.