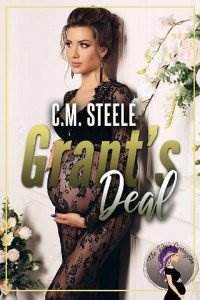 I can’t believe that I’m doing this.

This is fucking stupid.

My hands thrust through my short black hair as I attempt to rationalize my situation. I’m sitting in my limo with my driver well aware of my destination. I should have driven myself, but I’m not in the right frame of mind for driving anywhere.

I’m a grown-ass man about to nut in a cup to get a woman pregnant instead of finding one to let ride my dick until I come into her unprotected womb.

But I work too much to find a woman to date, let alone fuck. That’s my biggest conundrum. Owning six-hotels, running most operations from my corporate office gives me no time to meet a woman worth slowing down for.

I stare at the building. It’s nondescript except for the bold sign on the door—Hope Fertility Clinic of New York City.

I should turn around and forget this insane plan. After all, this is a cockamamie idea that we put into motion out of the blue, my friends and I. How is it that five of the wealthiest, fairly intelligent men in the city decide to pull a stunt like this? Shaking my head, I whisper to myself, “I’m not doing it.”

Just before I press the button to the driver to tell him to go to the office, my phone vibrates in my pocket, halting that request.

Believing it’s my lawyer who I’m waiting to hear from, I answer it without hesitation. “Masterson.”

“Are you there yet?” Damn it, I shouldn’t have told them I was going right now. Next time I need to check who’s calling. It’s a simple thing to do.

“What the fuck do you want, Stefano?” The evident irritation in my voice is enough to get most to back off, but not Stefano. We’ve been friends since college, and he’s an asshole too. He’ll needle me until he gets what he wants.

“Relax, you sick son of a bitch. I’m still in the limo. I’m having second thoughts. There’s no fucking way I’m comfortable with all of this.”

“Get on with it. We’re all going to do it.” I want to tell him to go fuck himself, but I guess that’s what he’s going to do when it’s his turn. I shake my head, and that’s when I catch something out the corner of my eye.

My entire head whips toward the direction of a petite brunette in a tiny light pink sundress. My eyes eat up every inch of her, cataloging it, memorizing every single detail. From her dark hair to her natural glossy lips down to the swell of her full breasts and flat waist that I plan to change very soon, and that round pert ass, calling for my hands to hold. I bite back a groan, adjusting my cock, forgetting I’m on the phone with my friend.

She’s tiny compared to me; the top of her head only goes up to my chest at the very most. Something in her gait tells me she’s nervous. Her head turns to the sides, scanning the area anxiously. Does she sense a predator behind her ready to strike his prey? Because I’m coming for her.

“I’ve got to go,” I grunt. Primal instinct leads me out of my limo and two steps behind the woman entering the clinic. She’s going into the same place. Shit. Fuck me, she’s trying to get pregnant. No way. The only way she’s getting knocked up is with me in my massive bed with my cock balls-deep in her as she screams my name for the next fifty years. I don’t know where that came from, but it’s what I want. There’s no way in hell I can think of anyone else filling her up.

I lick my chops like a hungry wolf and stalk closer.

Her long hair is braided down the middle of her back, but a few strands fall loose and frame her face. Standing behind her isn’t enough. I need another look. Adjusting my cock again because the bastard refuses to go down, I grab the door that closes behind her and whip it open.

I’m known for going after what I want in the boardroom, but this little girl is about to find out that I’m not going to let that stop me outside of the office.

Fuck, the office, the desk, the conference table, the sofa. Hell, all over every single hotel I own as well.

My dick is thinking of all the places I can drill into her while I’m at work. I’ve fucking lost my mind. I haven’t even heard her speak. She could have a voice that grates my nerves or be a total bitch who hates me. With the way my body has come alive from just one look, I might just look past it all.