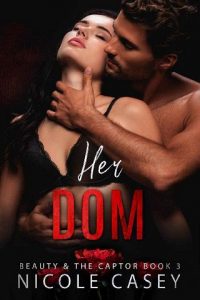 No more intrigue. No more murder. There’d been enough of that, don’t you think?

There was just here. Now. Me. Derek—the man who would help put me back together, even if he didn’t know it yet.

He was going to break me down into my most basic parts so I could put them back together again. And then this nightmare would be over. Done. Finished. We could put our tumultuous pasts behind us and finally, we would be free to live.

At least, that’s what was supposed to happen.

Things have a funny way of never turning out how they’re supposed to, don’t they?

When he held me close and I could feel his heart beating against my back, it was better. Never gone, but better. I could believe life did exist somewhere outside that cell, but still, I couldn’t see it.

I knew what I needed, what would slowly banish the nightmare I’d lived from my mind. And the man who could help me was right here, but how could I ask it of him? I’d opened my mouth so many times to let the words out, but every time they got stuck in my throat. How could I ask him to do the things he’d sworn to never do again?

But I wasn’t strong enough. I didn’t open my mouth. I didn’t ask him for what I desperately needed. I stared at the wall and watched in my mind’s eye as the devil tore the flesh from my body with his whip.

Another day passed, and then another. I took the pills Derek gave me. I ate when he brought me food. I let him help me into the shower and I laid in the bed that was like a silken cloud in comparison to the cold, stone floor where I’d thought, no, I’d prayed, not so long ago I would die.

Maybe I was getting better on my own. I wasn’t grateful the fates had sent Derek to rescue me, but the bitter resentment I’d felt in the first days had deflated. It wasn’t an overwhelming presence now. It was small, an echo of regret that floated in the back of my consciousness. Not gone, but better. I was getting better.

Derek was still asleep. I could hear the even inhale and exhale of his breathing and felt the steady beat of his heart against my back. I slipped from beneath his arm as quietly as I could and stood up. My ribs still screamed in protest, but I could get up on my own again. Better—I was getting better.

When his breathing remained even, I tiptoed into the bathroom and closed the door quietly behind me. I would shower, without his insistence and without his help, because I was getting better.

I let the unbuttoned shirt I wore slip off my shoulders and turned on the faucet. Before I could step in though, I caught sight of my reflection in a broken shard of mirror that hadn’t smashed to the floor with the rest of its pieces. It was a small shard, smaller than half the size of my hand, but the unfamiliar person it reflected back at me made me curious. It was a morbid curiosity. Nothing I saw there would make me feel better, but I needed to look.

I pried the shard loose, forgetting about its sharp edges until a thin rivulet of blood dripped down the glass. It wasn’t a sight that shocked me anymore. I’d seen more of my blood drip from my body than any person should ever see in a lifetime. A few more drops made little difference, and the sharp sting from the source was little more than a tickle. I wiped the blood away with a cloth and held up the shard in front of my face.

Only, it wasn’t my face. Not the one I remembered, at least. Most of the bruising had faded to hideous shades of green and yellow, like a poorly applied camouflage mask. My cheek though—the one that had been ground against the stone floor relentlessly—resembled something from a horror film. Scabbed and crusted, with shiny, white edges where the skin had begun to heal. The green eyes that stared back at me weren’t my own. They were dull, almost lifeless, despite the shimmer of fresh tears welling there.