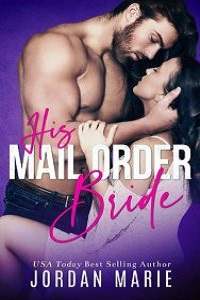 I slam the door against the wind with a hard bang. The Alaskan winds are gearing up for winter and they’re going to be harsh about it. I work in the midst of nature’s most hellish elements, on fishing boats, so this isn’t exactly welcome news, even if it is to be expected. It’s a cold fucking job, but it more than pays the bills, it keeps me out of the nine-to-five grind that would probably kill me, and it lets me be free, smell clean air and live, which is more than I could do in the city. I’d die going back to the life I had before.

I walk over to the fireplace and stoke the ashes from the fire I had roaring before I left this morning. I make quick work of adding more wood and in no time I can hear the crackling of the fire and feel the warmth from the blaze. My cabin isn’t huge. I have a secondary heat source, but it’s about sixty in here right now, so the fire is definitely needed.

I look around the large great room with a sense of pride. I built this house from the ground up. I did everything, from cutting the logs to honing the wood. It’s mine, completely. The polished wood ceilings and walls shine, and the ceilings are huge. I didn’t want an attic. I wanted space. I’m tall at 6’10 and the last thing I want to worry about is bumping my head when I walk into my own damn house. I’m a big hulk of a man, broad and tall, with muscles gained from working outdoors for the last fifteen years. I wanted a place where I could be comfortable. I made this house to reflect that. The great room is indeed great. Cathedral ceilings, wood floors, ceilings, and walls. There are large top-to-bottom windows that showcase the beautiful—but deadly—landscape. The room is open to the kitchen, mainly because I didn’t want walls to hold me in, either. One outer wall contains nothing but large, rectangular windows that start at the floor and go up about nine feet before they stop. There are three of those in a wide vertical display that’s broken only by about a foot and a half of shiplap between them. A glass door follows those and then three more windows, for a uniform geometric design that feeds my OCD while maintaining my need to feel like I’m outside, even when I’m not. The kitchen contains one large wall of cabinets with granite counters and a copper farmer’s sink. There’s a large bar in the middle of the room, made from shiplap and butcher block counters. The stove and fridge are on a side wall creating an L-shaped layout and keeping the kitchen streamlined and uncluttered.

Yes. This house is me. This land is me. I might have been twenty-one when I moved here, but now at thirty-six I am Alaskan. I couldn’t be happy anywhere else.

There is only one thing that I’m missing. A woman. Women here are few and far between. The ones that are here usually have men who keep them close. The ones that don’t have a man, for whatever reason, are usually hardened by the lifestyle. They don’t call it the wilds of Alaska for nothing. That doesn’t appeal to me.

I have a clear vision of the kind of woman I want.

I’ve jacked off to the vision of her for years.

She’d be tall. I’m a big man with a big cock, and I don’t want to feel like I’m risking hurting a woman just because I get a little rough in the bedroom. She’d have blond hair. Hair to remind me of the warm Alaskan sunshine that blazes across the mountains. She’d have blue eyes the color of the water that owns part of my soul and she’d be able to care for herself when I’m away working late. I don’t want someone I have to constantly worry about.

I pick up the scattered envelopes lying on the coffee table. The woman I’ve found is nothing like that, but she has me fascinated with her.

I want Carly. I open the envelope and pull out the latest picture she sent me. She’s outside kayaking. Her face is alive and full of happiness. Her long, brown hair is pulled back, while her dark eyes are captured, sparkling at the camera. She’s nothing like what I was looking for, but she’s exactly what I want. I can hardly believe I found her.

A couple of the men on the ship with me told me about the website Single Alaskan Men. Apparently, Nate found his woman that way. I was skeptical but I’ve been writing back and forth with Carly for about five months now and I’m convinced. She’s exactly what I need. She’s the final piece to the puzzle. Once she’s here, my life will be exactly what I’ve wanted from the beginning.