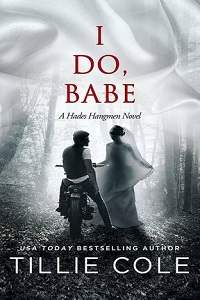 “Fuck. Seen the tits on that?”

I looked across the yard to see who Ky was pointing at. Some blond club slut sat on my old man’s lap.

“That’s the type of bitch I’m gonna marry. Tall, blond, hot with massive tits.” He shrugged. “That’s if I marry. Ain’t sure I want a ball and chain tied to my ankle all my life. I want uncomplicated, no nutcases, no stage-five clingers, and a bitch that sucks my cock whenever I fucking tell her to.”

I laughed and shook my head. He was always like this.

“And you?” he asked with his cocky fucking smile.

Ky’s smile immediately dropped, and he threw his head back dramatically. “Argh! Not this shit again!”

“I answered your fucking question. That’s who I’m gonna marry. The wolf-eyed bitch I met behind the fence,” I signed. I could talk to her, asshole. You know what that means to me? I wanted to add on. . . but didn’t.

“Yeah, well good luck finding her, Styx. I’m still convinced you got bit by a snake in the long grass and fucking hallucinated the whole thing.”

“What you two cocksuckers talkin’ ’bout?” My old man stood before us. He had fucking hickeys all over his neck and his newest slut’s red lipstick smeared all over his mouth.

My old man frowned. “Better not be to each other. Fucking queers ain’t welcome in my club.”

“Yeah,” Ky said dryly. “Can’t get enough of Styx’s chub in my mouth. Tastes like chocolate.”

My old man slapped Ky across the head.

“Ow!” he hissed and held up his hand when my old man came back for more. “Calm the fuck down. I was just saying I liked the club slut you were tongue deep in. Hot. Good tits. All that shit.”

“Yeah?” My old man shrugged. “I’ll be done with her by tonight. Have at her pussy all you want after that.” He laughed. “If your dick is even big enough yet to fill her hole.”

Ky smiled and raised his eyebrows. “Plenty big enough, Prez. And she’ll know it when I make her scream.”

My old man’s eyes fell on me. “And you? Who the fuck did my mute-ass retard son say he’d marry?”

I stared at the fucker with hard eyes, saying shit-all to answer his question.

“Wolf eyes,” Ky said. I fucking glared at the prick, but the asshole just winked at me and stuck out his tongue. He knew he’d just dropped me in shit.

“Not this again,” my pop said. “Not only do I have a retarded son, but he’s obsessed with some baby slut he dreamed up outta nowhere.” He shook his head, then leaned down. “I’ll tell you fuckers one thing: don’t ever fucking get married. Worst mistake I ever made.” He pointed to me. “His momma was a slut, and once she left with that Diablo scum and I finally killed her, I was fucking free. All the pussy I want now. The perk of being the prez of the best fucking MC this country ever saw.” He looked at me again. Then the asshole kept laughing until he walked back to Ky’s pop and his slut for the night.

“Styx—”Before Ky could talk I was off my seat and heading toward the clubhouse. I was pissed as fuck. “Styx!” Ky shouted louder. “I was only fucking with you, brother!” But I flipped him the bird and held it up until I turned the corner and was out of sight.

The mural of Hades and Persephone that graced our club’s wall stared back at me. I walked closer, staring at Persephone. The bitch had long black hair and ice-blue eyes . . . fucking wolf eyes like that bitch behind the fence.

I knew she was.

As I stared at Persephone—the perfect image of what Wolf Eyes would look like when she was older—I knew I hadn’t imagined shit. I had seen her—crying, pale skin, dark hair, blue eyes, wearing a damn pilgrim dress. And when I looked at Persephone with Hades, the fucker looking just like me, I knew I’d find her again.

Because I’d spoken to her.

Several weeks until the wedding . . .

I threw my cut down on the kitchen table and rolled my neck. My shoulders were stiff from all the fucking weights I’d been hitting in the gym, and I was dog tired from the runs we’d had to do of late.

Gun contracts were back, courtesy of the cult being fucking gone. Every fucker that had left us had come crawling back with their tails between their legs, practically offering to suck our cocks. So I had done what any good prez would do. I’d charged the traitorous cunts double and spat in their ugly faces.