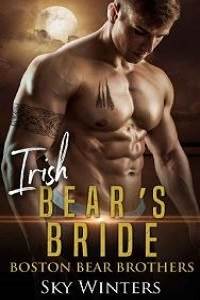 “What is it?” Ronan asked, walking toward the box his brother Olcan had open on the table in front of him and pulling back one of the half-closed flaps for a better view

“A warning,” Olcan replied as their brothers Fergus and Niall approached.

“Feckin’ Hell!” Ronan uttered, jerking his hand away from the box. “What are those? Ears?”

“Why?” Ronan asked, now joined by Fergus and Niall beside the box.

“A gift from the Maguires.”

“Who do they belong to?” Fergus asked, his face twisted into a mask of anger.

“Our spies, according to the bloody note included on top of them,” Olcan replied, picking up a piece of paper with dark splatters on the edges, holding it between two fingers for them to read.

“This blood is on your hands. We’ve sent what’s left of the bodies to their kin. They sang like birds between screams. War you wanted. War you have.”

Despite being the slightest of the four McNally men, he was never one to back away from a fight. Always ready, some would say he was even eager for one.

“Fight how? The spies have been feeding back some information that already reflects that we are far outnumbered. Hell, we’re even out trained on the field of battle,” Niall said.

“We’ve done what we could in that arena,” Fergus barked.

“Aye. I know you’ve done the best you could, but we’re limited in numbers and we haven’t had the kind of freedom to train that they have in the old country. Not only have they been using their access to so many Omegas to multiply as rapidly as possible decade after decade, but they’ve absorbed any clans that might be willing to help,” Niall complained.

“They’ve not sucked them all in,” Olcan replied.

“We ran away like cowards. Dad yanked us up and slipped away to America so they couldn’t get to us,” Niall reminded him.

“Yes, and if he hadn’t, we’d all be dead. You know that Sorley Maguire would not have let us live, and we were just boys. The auld fella couldn’t defend our mother and us.”

The mention of their mother and father drew silence for a moment. Whether they were all lost in memories or contemplation, Niall wasn’t certain.

When the Maguires had come for their clan, their life had changed in an instant, going from the four sons in line for their father’s role as Alpha to a rebirth on American soil as one of the most powerful Irish mafia families in Boston.

“Clan Byrne,” Fergus said, causing them all to look at him in surprise.

“Clan Byrne? Really? That’s who will save us?” Niall growled.

“No, not save, but help,” Fergus replied.

“Clan Byrne can’t even help themselves. They are nothing more than modern-day indentured servants to the Maguires. Most of their clan was destroyed alongside ours and they only exist because the Byrne’s have a use for them,” Niall objected

“What is that use?” Ronan asked.

“The Byrnes were left with mostly women and children—Omegas,” Fergus told them. “The men run guns for them up north, Belfast to Donegal.”

“They can hide us while we do our own recon, prepare for what is to come,” Fergus replied, looking up at Olcan for his approval as Alpha.

“Our own recon?” Niall asked, eyebrows raised. “You are suggesting we go to Ireland and confront them on their own turf? That’s suicide.”

“I’m suggesting that we send out a small party to embed themselves within Clan Byrne to find out things firsthand,” Fergus replied, still watching Olcan for a response.

“Didn’t we already try that with spies?” Niall asked.

“You think that we can go there and bring them around to reclaiming what was taken from them after all this time?” Olcan asked.

“I don’t know, but I can’t think of any other options that are on the table for us right now. We don’t have the numbers, and the only way to get them before they come for us is by rallying other families around our cause, eliminating the Maguires once and for all.”

“It’ll mean we have to take down Trill, first and foremost,” Olcan told him.

“I’ll do it,” Niall volunteered. “We can’t spend our lives looking over our shoulders like cowards.”

“You can’t. You’ll be brought to justice for taking out an Alpha in the old country. They play by different rules there. I’ll have to do it.”

“No. You have a family. You both have families,” Ronan replied. “Someone has to stay and keep people here safe. It should be you. You and Fergus have families. Niall and I don’t. Let us go and see what we see.”