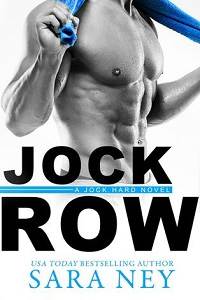 “The Friday When We Met.”

“No offense, Scarlett, but if you didn’t feel good when I invited you to come with us tonight, you should have said something. Now I feel terrible.”

Tessa—a girl I lived next door to in the dorms freshman and sophomore year and remained friends with—flips her perfectly coifed hair, eyeing up my soft sweater, the one I always wear when I’m getting over a cold, or sick, because it’s cozy, oversized, and comforting. It’s more appropriate for a bonfire or night at home than a college party, and when Tessa shoots me that sympathetic face—lips turned down at the corners, eying me skeptically—I manage a soft laugh.

“Trust me, I’ve been home for the past few weekends—I needed this night out.”

“Are you sure? Because if you’re not…”

“I’m fine—that’s why I wore this sweater. It’s going to keep me toasty warm tonight so I don’t catch a chill.”

The last thing I want is her changing her plans because of me.

“But that sweater…” Tessa worries her bottom lip, chewing off some of the lipstick. “It gets so warm inside those parties…maybe just take the scarf off? And the jacket?”

“Nothing’s wrong with it, but we’re going to the baseball house—you know, on Jock Row.”

When she says Jock Row, her voice changes, fills with this weird wistfulness and a playful giddiness, like we’re heading to some magical place. We’re not.

Jock Row: the off-campus housing block where student athletes live and party. Similar to Greek Row, each sport has its own designated apartment or house, spanning an entire city block. They study together, play together, live together. Hell, they even eat together in a special cafeteria I’ve only heard whispers about, with super special, healthy jock food.

How nice for them.

I remember listening to her talk about it in the dorms when we were new students; she’d babble for hours about wanting to date an athlete, explaining which ones she thought were cute, trolling them online. Crushing hard, wondering what it was like to date one but never having the lady balls to go to one of their parties.

Well, we have the courage now.

Tessa still has the same stars in her eyes when she talks about it, still has that same breathiness in her voice.

In a way, I don’t blame her, because the guys on Jock Row?

They aren’t boys—they’re a different breed of student body altogether.

These boys don’t compare to the guys from back home that I’m used to flirting with: the gangly, juvenile boys I grew up with who went to college but still haven’t matured—they are nothing like the boys of Jock Row.

These guys? They’re men, with actual responsibilities and obligations. They work hard and play hard.

In peak physical condition—probably the best shape they’ll ever be in their lives.

I’ve seen them in action on the baseball field; I know the team is good, and damn, they look good, too.

How do I know? I got close to one once, rooting around for a beverage at the football house one weekend a while back. A big, burly player cut me off in line at the keg, leaning over to grab the beer tap with his meaty fingers, and I accidentally caught a whiff—a long, deep whiff, one that ended with an internal ‘ahhh’ that only comes when we appreciate something truly delicious.

Obviously, being a warm-blooded female, I checked out his upper torso, muscular forearms, and thick neck in the process—like every other female in the room with a set of functioning eyes had been doing.

Every female, like Tessa and her roommate, Cameron, who’s still in their bathroom primping.

Guess I can’t fault her; I’ve laid eyes on the guy a few times myself and don’t blame her for fawning over him. He’s dark, broody, and extremely good-looking, plus Latino to boot.

“Please trust me,” Tessa is saying. “I’m no nursing major, but I know this: if you wear that outfit to the party, you’re going to have a stroke, and there won’t be anyone there to revive you.”