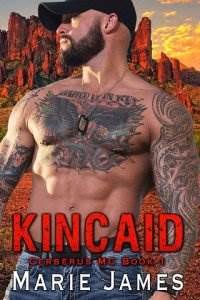 “Weapon!” I hear one of the SWAT guys in front of me yell. The sound of weapons discharging rings out, lasting mere seconds.

I’m fourth in line behind three Denver Police Department SWAT Officers, which means we split off in all directions once we cross the threshold into the dank, dark home. The smell inside is putrid and makes me immediately feel the need to shower. Most meth houses are like this, and I cringe knowing that a child has been living in these conditions.

One officer begins checking pulses on the three individuals in the living room. Another officer splits off into a bedroom to clear the closet, and the third clears another bedroom, leaving me with the kitchen. I can easily tell there are no other visible threats, but a sound from behind a closed door draws my attention. With my M4 at the ready, I turn the door knob and tug the door open.

“Holy fuck!” I gasp when I see a woman curled up on the floor of the tiny closet. “Josie? Joselyne Bennett?” I say doing my best to gain some composure.

I would’ve never told Kaleb this, but I was certain we’d find Josie dead if we ever found her body at all. My chest constricts the way it always does when a situation turns out opposite of how I imagined it. Absolute, pure joy is what I’m feeling at the moment, but my face falls when I see the condition she’s in. She’s not out of the woods yet.

“Girl, we’ve been looking for your ass everywhere!” I can hardly contain my joy at knowing my cousin will not have to deal with the death of the woman he loves.

“Jesus didn’t know I was in the closet?” she asks with a hoarse voice.

Jesus? She’s delirious, no doubt from being starved and hog-tied in here for weeks.

“You being here is a miracle, darlin’, but this ain’t heaven. My name is Diego Anderson, and I have a cousin that’s going to be beside himself knowing we found you.”

I can tell she’s trying and failing to open her eyes against what has to be blinding light for her.

“Kaleb,” she whispers, and I can see the tremble of her lip.

I step out of the way as the SWAT team leader enters the room. I leave the room to head outside planning to call Kaleb, but I find him standing in the hallway looking into one of the bedrooms. He’s sobbing uncontrollably having no concern for the tears rolling down his face.

I walk up and clasp him on the shoulder. “Kaleb,” I whisper trying to get his attention. “She’s asking for you, man.”

He turns so quickly toward me he nearly loses his footing. I look past him and wince as a clearly deceased woman comes into view.

“What?” he asks with a slight shake of his head.

“Josie, man,” I tell him gently pulling him from the doorway and down the narrow hall. “Keep your shit together in there, Kaleb. She’s been through hell and looks it,” I warn him. “But you have to keep it together, man.” He nods as he makes his way into the crowded kitchen.

At the sight of her curled up on a filthy blanket just outside of the door he gasps, both in relief and torment from seeing her like this. I keep my hand on his back until he crouches down beside her.

“Kaleb,” I hear her whisper.

“I’m here, Josie,” he returns leaning in to kiss her forehead.

Short of her never being abducted in the first place, this is the best outcome anyone could’ve ever asked for.

I’m trying to be as quiet as I can, but I can’t keep the hiss from slipping past my lips as I wrap the thick, elastic bandage around my ribs. I should probably go to the hospital, but I know there’s nothing they can do about ribs even if they’re broken and not just severely bruised. They don’t hurt as bad as they did last time, and I know it would only mean more trouble for me if I alerted anyone to my injuries.

Using makeup too dark for my complexion, I apply liberal amounts around my eyes and my left cheek. I get better at this part each time I upset my husband. I wish I could figure out a way to keep from making him angry, and I wouldn’t have had to watch YouTube videos on how to cover bruises and the proper way to breathe with broken ribs. It’s a very sad day when society has such problems that necessitate videos for abused women. It makes me wonder what women did decades ago when they didn’t have the wonderful internet to help them.

I do my best to cover the gash on my swollen lip with lipstick and think about what caused this latest episode.