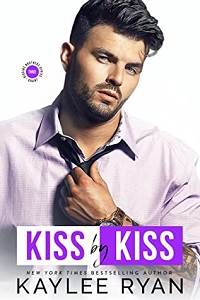 It’s our regular Monday morning meeting—the first since Royce and Sawyer have been back from their honeymoon. They waited until after the holidays to go, not wanting to miss time here with the family. That means we’ve spent the last hour shooting the shit, instead of actually working. That’s the perks of owning the company. My brothers and I may have wasted this meeting to catch up, but that doesn’t mean we’re not dedicated to Riggins Enterprises. Our father built this company with our mom at his side. It’s our legacy and one we take seriously.

“Knock, knock.” Layla, who is our assistant, and my brother Owen’s fiancée and baby momma, enters the room. “Sorry these are late. The bakery had some transportation issues.”

I watch in fascination as my brother Owen jumps from his chair, the conversation he was having with our youngest brother, Marshall, long since forgotten now Layla is near. He takes the box from her, sets in on the end of the long conference table, and pulls her into his arms. One arm goes around her waist and the other rests on her belly, over their unborn son. Out of the five of us, Owen is the last one I would have guessed to be a father first. However, he met Layla and fell hard and fast.

He and my oldest brother, Royce, claim it’s the “magic.” That tells me they’ve spent too much time talking to our father. Stanley Riggins loves his wife, our mother, Lena, and swears it’s “magic” that got them together. I think the old man just likes to tell tall tales, and now that my two older brothers are tied down, they’re falling in line with his theories.

“Whatcha got there, Lay?” I ask my future sister-in-law.

“Oh, a new bakery just opened up down the block. You have to try these.” She steps away from my brother to open the box.

He’s the fourth brother. Royce is the oldest, then there’s Owen and then me. I’m the middleman. Literally. The two youngest usually call me to pick them up when they’ve had too much to drink, and the two older brothers lean on me, more so than the younger two. I don’t mind it. I love my family, and being the middleman keeps me involved in all of their lives.

“Hush—” I point at Conrad “—and step away from the pastries.”

He throws his head back in laughter. “Lay, tell him to share,” he says as any little brother would. It doesn’t matter that we’re all grown men.

“Now, boys, there is plenty for everyone,” she assures us.

“But I get first pick, right?” I say, standing and walking to where she and Owen still stand at the end of the table. I bat my eyelashes, hoping to sway her to my way of thinking.

“They’re all the same.” She grins. “No way was I going to cause World War III over breakfast.”

“Good call, Layla,” Royce chimes in. “I’m going to take one to Sawyer,” he says, standing with stars in his eyes as he mentions his new wife.

“I stopped there first.” She smiles at him.

I place my hand over my chest. “Layla Riggins, you wound me.” Her cheeks pink at the use of our last name instead of hers. She might as well get used to it. Hell, I’m surprised Owen hasn’t raced her down the aisle yet. He’s head over heels in love with her.

“Love that.” I hear Owen whisper as I reach into the box and pull out a muffin. I bring it to my nose and pull in the scent. “Ah, banana nut, good choice.” I nod, peel back the wrapper, and take a huge bite.

“I wanted one of everything.” Layla laughs. “Pregnancy cravings, I guess. So, I told the woman behind the counter to surprise me, but that it all needed to be the same.”

“Damn, sis, these are good,” Marshall says, shoving the last half of his muffin in his mouth all at once, and fuck it, I do the same. We’re classy like that, us Riggins brothers.

“Where is this place? I’m going to have to stop in and see what else they have.”

“One block over.” She points behind her, which tells me that I need to make a left when I leave the building. I make a mental note.

That muffin was too good not to stop into the bakery and see what else they have to offer. I work out five days a week, usually before coming into the office. I have a gym at my house, but usually I meet my two younger brothers at the gym. It’s a good time razzing each other, and it’s always better to have someone to work out with. Especially when you need a spotter. Royce and Owen used to sporadically join us, but now they both have beautiful ladies warming their beds, their presence has been nonexistent. Not that I blame them. They both hit the “significant other” lottery.