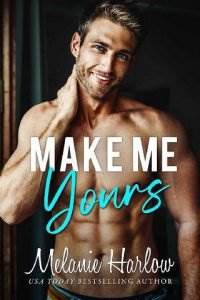 “Is that what you’re going to wear?” My nine-year-old daughter, Mariah, assessed me from my bedroom doorway, her nose wrinkled.

I studied my reflection in the mirror above my dresser. “Yeah. What’s wrong with it?”

“It’s boring. I thought you were going to a party.”

“It’s just my friends at the pub.” I frowned at the hunter green polo shirt I’d chosen because it was on the top of the pile in my drawer. Was that the problem? Or was it the khaki pants?

Mariah entered the room and flopped onto my bed, chin propped in her hands. “But it’s a party, right? A bachelor party for Uncle Griffin?”

“Yes.” Bachelor parties were not my favorite thing, but Griffin Dempsey and I had grown up next door to each other, and we’d been best friends since we were younger than Mariah. He was getting married in two weeks, and I was the best man—in other words, tonight was a must-show.

“It’s a guy who isn’t married.” I scratched my jaw. Maybe the belt was wrong. I unbuckled it, deciding to swap it for a darker brown leather.

“Are you a bachelor?”

“But you’re not married.”

“But you’re not divorced. Is there a name for what you are?”

“A widower,” I told her, slipping a new belt through the loops.

“Daddy! You’re thirty-three. That’s not that old,” she said, letting me know with her tone that it was somewhat old.

“Thanks. Is this any better?” Turning around, I held out my arms, showing off the new version of my party outfit.

I gave her a dirty look.

“What? You asked. I’m just being honest.” A cheeky grin appeared. “You look like the guy who came to measure for the new windows yesterday.”

I groaned. “Come on, that guy had a huge pot belly.”

“Or maybe the guy who sold Grandma her new car.”

She squealed and tried to scramble off the bed, but I managed to get her in my grip and tickle the spot behind her left ear that always made her giggle and squirm. “No! No! I’m sorry!” she shrieked. “I take it back! You’re the handsomest daddy in the world!”

My mother appeared in my bedroom doorway, arms crossed. “What on earth is going on in here?”

I gave Mariah a quick noogie before releasing her. “My daughter says I look like Fred Yaldoo.”

Just to make sure she wasn’t on to something, I jumped up and checked my hairline in the mirror. Thankfully, it looked fine. I probably could have used a closer shave, but whatever. Griffin and the guys weren’t going to give a shit about my scruff.

Mariah scooted off the bed and put five feet between us. “I did not say that! I just said that his outfit was boring.”

My mother studied me critically from the doorway, one hand on her hip. “Is that what you’re wearing to the party?”

I rolled my eyes, then leaned down and yanked my brown dress shoes from the closet. “Yes. And I’m leaving now, before my self-esteem gets any worse.”

“Well, it wouldn’t kill you to dress up a little more,” my mother went on, taking it upon herself to enter my room and start straightening up the items on the top of my dresser.

“You live in my house, you deal with my cleaning.” She gathered up stray coins and dropped them into a little painted clay bowl Mariah had made in art class last year. “You want to live in a mess, you get your own house.”

Mariah and I exchanged a here we go again glance. My mother’s definition of a mess was not the same as a normal person’s. Crumbs, dust, and clutter were the enemy. Growing up, I rarely saw her without a broom, the vacuum, a rag and a spray bottle in hand. My older brother Greg and I had learned early on that you take your shoes off at the door, you wipe up your spills immediately, and you make your bed in the morning or else. We used to joke that she wore hand sanitizer like perfume. We’d wrap it up for her at Christmas.

“Actually, I’ve been thinking about that,” I said, tying my shoes.

“About getting our own house?” asked Mariah, surprise evident in her voice.

“Yes.” I straightened up and looked at her, trying to gauge her reaction. “What do you think about that?”

Mariah bit the tip of her thumb. “Where would it be?”

“I don’t know. We’d have to look. Take your thumb out of your mouth.”

She did as I asked. “Would we move far away?”