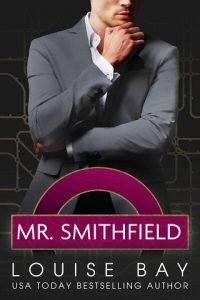 He was a thirty-three-year-old single father of an adorable four-year-old, and just happened to be the only man I’d ever met who made my insides actually quiver when he looked at me. Where would he keep his spatulas?

I’d looked in every single drawer and cabinet in the kitchen and found nothing. All I wanted was an omelet. I’d been looking for about thirty minutes and had found Tupperware, an old Good Housekeeping recipe book from the seventies, and even what looked like a shrunken version of one of those tools to plane wood. But no freaking spatulas. Perhaps the British had a habit of storing vital kitchen equipment in their bathrooms or something? I pulled out my phone and called my sister. Hollie understood the British better than I did.

“Where do Brits keep their flippers?” I asked.

“Yes, Hollie, my stomach’s rumbling, it’s almost nine o’clock at night, and I’m searching the kitchen for diving equipment.” I collapsed onto the soft, navy cushions that covered the long wooden bench that ran the length of the kitchen table. “I just want an omelet.”

“Well first of all, they call that kind of spatula a fish slice,” Hollie said in her typical no-nonsense tone.

I was pretty sure English was still the language of both England and the United States, but since moving to London a few weeks ago, sometimes I had to check out Wikipedia to make sure nothing had changed. Just being in the kitchen required a translator. I’d discovered that burners were hobs. Kitchen counters were work surfaces or sides. Sides of what? According to a Google deep-dive I wasn’t entirely proud of, a “side” could mean any raised, horizontal surface in any room—so precisely not a side of anything. And now spatulas were fish slices. “What if I don’t want to prepare fish with it? Or slice anything?”

I could almost hear Hollie shrug. “Still a fish slice.”

“As far as I’m aware, they keep them in the same place as Americans do. Kitchen, drawer, pot on the counter—that kind of thing.”

Maybe Gabriel didn’t have kitchen utensils, or maybe he hid them behind that locked door at the back of the kitchen. It was the only room in the house outside of the bathrooms that had a lock on it. Gabriel’s clear, unspoken message to me, the hired help, was Do Not Enter. And therefore, of course, I desperately wanted to get inside.

“Are you okay?” Hollie asked.

“Well, I’m a little hungry,” I said, standing and heading to the fridge. Omelets were off the menu, so I’d have to find something else.

“Yes.” No wonder he needed a live-in nanny for Bethany. He’d left the house just after six this morning and still wasn’t back. Everyone had tried to convince me not to take this job. Even Gabriel had tried to discourage me by telling me he needed a nanny who would work long hours for the next few months, as he was going through a particularly busy stretch at work. I’d be working weekends and overnights, too. Still, I wasn’t put off. How could I be? Bethany was adorable and Gabriel lived in a mansion that looked like it was something straight out of a Dickens novel, right in the center of London. I could never have afforded to live in Smithfield on a graduate paycheck. Which was another reason why my program being delayed until September wasn’t the end of the world. This way, I’d get to enjoy London without the pressure of starting a career at the same time. It was a silver lining I didn’t even have to squint to see.

At first it wasn’t easy to see a bright side to my program being delayed by six months. The recession that started at the end of last year had thrown so many businesses into a tailspin, even the Fortune 500 company that was going to employ me. I’d been so excited to start, especially since the first assignment was in London. By now I’d thought I’d be having cocktails with my coworkers and laughing about photocopier jams, or whatever it was people in offices laughed about at happy hour. I was supposed to have one foot on the career ladder, rather than one hand wiping a four-year-old bottom.

But taking care of Bethany was a job in London, period. And any job in London was bound to be more exciting than every job back in Oregon, especially since Hollie and her soon-to-be husband lived here. My sister wanted me to wait tables, be her assistant, or do basically anything other than move into Gabriel’s house. But I had pediatric first aid training from summers as a lifeguard at the community pool, plus plenty of babysitting experience. This job came with rent-free accommodation, which meant I didn’t need to rely on my sister at all. Hollie had been putting a roof over my head for twenty-three years, and I was desperate to set her free and stand on my own two feet.