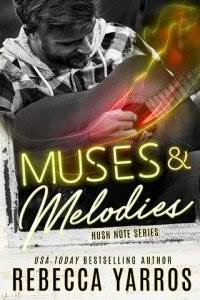 I didn’t just want a drink. I wanted a dozen. Whiskey. Tequila. Vodka. Anything that would take the edge off was fine by me.

Wanted wasn’t even close to the right word, but after forty-five days in a rehab center that cost more than my penthouse, I knew I didn’t need a drink to survive—I wanted one.

Since that wasn’t going to happen, I settled for another orange soda as the limo wound through the streets of Seattle. I’d devoured cases of this shit in the last six weeks, which may have amped up my sugar addiction, but at least it wasn’t booze or pills, right? I cracked open the top of the ice-cold can, and every set of eyes in the back of the car looked my way. Not that they hadn’t been staring since the moment I’d landed at the airport—now they were just blatant about it.

“I made sure you had plenty of that stocked,” Ethan, our tour manager, said with a smile and nod that hit an eleven on the awkward scale.

Jonas nodded, watching me like I was a grenade that had already lost its pin. “And we had your apartment cleaned out too.”

As one of my closest friends and the lead singer of our band, Hush Note, he knew all too well what happened when I went kaboom. He’d been the one to haul me off the tour bus floor after I’d taken some unmarked pills with a groupie like a dumbass, then sat by my side in the hospital, waiting to see if I’d live through my stupidity.

That had been my come-to-Jesus moment. I had become a liability, not just to the band but to my best friends’ personal lives as well…and they didn’t even know the why of it.

“We figured it might help with…you know...temptations and staying clean and all that,” he added, when I didn’t respond.

Now they were both nodding.

“Right. Thanks.” One of the reasons I kept this trip to rehab a secret was because people never knew what to say or how to act after I got out. Before I went, they were all too eager to tell me exactly what they thought, but afterwards, I got the nuclear bomb treatment. Kid gloves, forced smiles, and a lot of fucking nodding—like they thought I might go off at any second if they made a false move.

Since this was my fifth trip, and the only one I hadn’t walked out on, I knew they were annoyingly proud yet terrified it wouldn’t stick.

At least we were all on the same page there. I was a Class-A fuckup, whose sins were excused because I had a symmetrical face, lean body, and magic hands when it came to a guitar.

But my sins had long ago outnumbered my excuses, not that I could tell by the supportive, forced smiles on Jonas and Ethan’s faces. My first sin? I was an alcoholic who dabbled in drugs with the clichéd justification of numbing the pain. Go figure, that apple hasn’t fallen far from the tree.

“Yeah. Your eyes are clear and everything,” Jonas added.

More nodding. They’d turned into a pair of bobbleheads.

Quinn, our drummer and the third musketeer in our band’s trio, scoffed. “Seriously, guys. Could you make this any weirder for him?” She shook her head beside me. “Relax. He’s still Nixon.”

“You guys didn’t have to come,” I said for the fifth time since they’d shown up at the airport. Sin number two: my friends were way better people than me—I didn’t deserve them. The minute they’d found out where I was and when I was coming home, they’d interrupted their happy little sitcom lives and shown up.

“We wanted you to feel supported,” Jonas repeated the same answer he’d given the first three times. None of them had known about attempt number four.

“Mission accomplished. I’m supported.” I raised my soda in a mock salute, then chugged half of it.

Quinn rolled her eyes, but she was used to me acting like a dick, so I didn’t worry too much. These three had seen me at both my best and worst since we started the band eight years ago. From the bar stage to sold-out stadiums, we’d had one another’s backs. We never aired band laundry in the press or stepped out for solo projects. We were dysfunctional as hell, but we were a family.

We turned the corner, and my building came into view.

A thick crowd of fans blocked the door and were currently going nuts over the sight of our limo.

“I told you we should have taken an unmarked SUV,” Quinn muttered, flipping through her phone.

“How did they know?” Ethan asked.

There were always fans outside my building—Quinn’s and Jonas’s too—but this was ridiculous. Was that seriously a giant poster board of a missing person flyer with my picture on it?