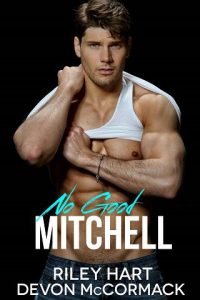 “Motherfucking Georgia. Small-ass, rural towns,” I grumbled, looking around and trying to figure out where in the hell we were. It was dark outside, pitch fucking black. I saw closed buildings, quiet roads, the shadows of trees, and not much else. No people, no signs pointing me in the right direction.

“Simmer down,” said my best friend, roommate, and current pain in my ass, Isaac, from the passenger seat. I was likely a pain in his as well because I was grumpy and ready to get where I was going.

“We don’t even have cell-phone service. How in the hell is there a town in the United States that doesn’t have a cell-phone signal?” We’d made it to Buckridge, that much I knew because we’d seen a Welcome to Buckridge! Population: 5! sign when we’d pulled into town—if you could call it a town, and obviously, it had more than five people in it, but that’s what it felt like.

I didn’t even want to get started on the name. There were a whole lot of jokes I could make about that, but I bit my tongue. I was tired.

Not to mention, clearly lost. I had no idea how to get to Mitchell Creek Distillery, which was on the Mitchell Creek property, which was suddenly mine. A parting gift from the dear ole dad I knew nothing about other than he’d had zilch to do with me my whole life. Small snippets of stories Mom had told me about him teased my subconscious—about her loving him, Dad loving me, and him doing the right thing—whatever that might have been—but I was only five when I lost her, the memories so old, I didn’t know if they were even true. I probably made them up because as a kid, I’d needed them to be true. But what it came down to was, he hadn’t been around, and he hadn’t come for me when she died.

Isaac pulled me from my thoughts, saying, “I’m sure the town has cell service, we just don’t, but we’ll get it, and then our GPS will work. If not, we just ask someone where Mitchell Creek is. It can’t be that hard to find—and hey, did you know there are two popular distilleries in this town? Or rather, they were both really popular, but then yours closed down two years before your dad died. Isn’t that kinda weird?”

No, no, I hadn’t known that, and at the moment, I didn’t much care. I knew I was being a dick, but I was on edge. It wasn’t every day you woke up in the premise of a rom-com—the whole small-town-legacy thing you didn’t know about. Not that there would be pretty gay boys for me to fall in love with, or that I’d be interested. That was how those stories always went, but yeah, I was fairly certain the gay population would consist of me and Isaac. Plus, I didn’t even know how long we would stay.

“Who do you suppose we ask for directions?” Teasingly, I slowed to a stop and rolled my window down. “Excuse me? Mr. Bear? Can you tell me where the distillery I have no idea what to do with is?”

“Oooh! Is it a sexy bear?” Isaac joked. He knew I didn’t mean the gay, human kind. “Wait. Are there real bears here?”

I turned to look at him. “I don’t know. Aren’t there bears in every rural town? Isn’t that like a thing?” Rural towns weren’t something I was familiar with, but it sounded like bears would be a thing. Great. Now I was going to worry about being eaten by a bear.

“I’d rather gay, human bears,” Isaac replied, and we both chuckled.

“Me and you both.” I eased my foot onto the gas pedal of my Lexus.

We’d taken this road trip from San Francisco to Georgia after being contacted by my biological dad’s—that felt weird to think—by Harris Mitchell’s lawyer and told I was now the owner of a closed-down distillery, a house, and land. It was all very cloak-and-dagger. I still didn’t know what the fuck was going on or why it wasn’t open. Losing money? Bad investments? I knew it had come as a shock to patrons when they’d closed. That much I read online. It had been very popular whiskey. All I knew was, suddenly it was mine, and it hadn’t been all that hard to find me if he’d ever wanted to.

What the fuck was I doing there? I shouldn’t have come. If my adoptive mom and Isaac hadn’t talked me into it, I probably wouldn’t have.

We drove down Main Street from beginning to end. Right as we were coming out on the other side of town, I heard the thump of music.

We kept going, and then off to the right was a…well, a fucking barn was what it looked like. They must have remodeled it and turned it into a bar or something.