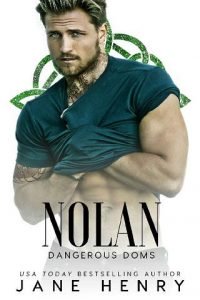 I walk along the rocky cliffs that overlook the Irish Sea, the most beautiful view in all of Ballyhock. Seems my brothers find solace here, so why can’t I? But I don’t. Every step I take makes me more restless, more antsy.

Today’s the second year anniversary of my father’s death.

I kick a rock with the toe of my boot and watch it tumble downward until it splashes in the sea below, quickly swallowed up. Gone. A hard, dangerous weapon one second, forgotten the next. An omen? I’m feeling melancholy tonight.

Up until a year or so ago, I reckon I was the one no one really respected in The Clan, the class clown. And hell, I earned that title, drinking myself to damn near death before I’d hit my twenty-fifth birthday.

But that was the old me. Before my father died. Before my brother Keenan took the throne as Chief and I moved up in rank. Before I kicked alcohol and took hold of my own life.

I take a smoke out of my pocket and light it up, inhaling the nicotine into my lungs and letting it out slowly. I traded one vice for another, I suppose, and why the fuck not. A man’s got to have an outlet. I won’t touch drink anymore, and honestly rarely smoke, but tonight… tonight’s a night I need fucking something.

Two years ago tonight my father was killed by a rival, a fucking Martin. We’re at peace with them now. My brother Cormac married the tribute they offered. But they aren’t friends of ours. We’ll honor the truce between us, but the Martins are dead to us.

What would my father think of me now? Seamus McCarthy ruled with an iron fist. He worked tirelessly to establish the McCarthy Clan as the most powerful leaders in all of Ireland’s underground. It matters to me to honor that.

I knew from a very young age, I never measured up to my father’s expectations. He expected his boys to be strong and valiant, rulers of this land who feared nothing. And I let him down. Until recently, my older brothers felt the same. Keenan, the eldest, barely hid his contempt for me. But I can’t blame him. I wasn’t someone who earned respect.

But that was then. And this is now.

My brother sits on the throne as leader, Cormac heir to the throne, and I’m third in command. Keenan and Cormac are fathers now, their wee babies growing in number as the years pass. Keenan has two babes and Cormac one, but it’s only the beginning of a new generation. Where do I fit in the grand scheme of the McCarthy clan?

My phone dings and I glance at the text from Boner.

Club tonight after the meeting, brother?

Boner would live at The Craic if he could, and hell, some days I don’t blame him. We’re well-known members there. Took me a while to get comfortable going without a drink, but now I welcome it.

I take another drag and draw it into my lungs.

Maybe Sheena will be there.

Sheena, the gorgeous, headstrong lass I’ve had my eye on for damn near as long as my father’s been gone. The fucking investigative reporter that doesn’t know what’s good for her. The girl I love to hate.

Last year, there was an incident at the club that scared the hell out of her, and it took some time before she’d come back to the club. She keeps her distance from me, though. She knows I’m onto her. I caught her trespassing on our land once, and I thought I’d put a decided end to her snooping. But hell, if I’m honest, I hope I haven’t.

I frown out at the sea again. Now that I think of it, I haven’t seen her recently.

The better question is, why do I fucking care?

I kick another rock into the sea for good measure.

I swipe my phone on and my finger hovers over the keyboard. Do I want to go tonight? I shake my head. I want to see what the meeting brings, first.

I shove my phone back into my pocket, crush the cigarette beneath my heel, then pick it up to toss in the bin inside. The girls get all cranky if you leave a butt by the cliffs, and I know better than to get under their skin.

“Nolan.” I look up to see Carson coming from the town centre, a steaming paper cup of tea in one hand and a paper bag in the other. His dark hair’s cut short, and damp, as if he’s just showered, his glasses perched on the end of his nose. Looks like he got his run in before the meeting tonight.

Carson grins and looks down sheepishly. “Bit of pastry,” he says.