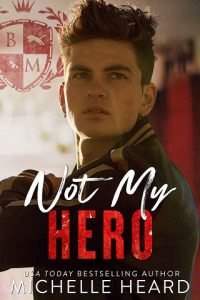 When I was younger, I used to pretend I was an alien. I dreamt my family would come and get me and take me back to a world where I would fit in. Or I’d get powers once I turned sixteen. Like in the movie I Am Number Four. Nothing huge. Just being invisible would’ve been great.

But sixteen came and went. I’ll be eighteen soon and have pretty much given up on dreaming about things that will never happen.

Still, I can’t complain. I got my wish. Kind of. Most people don’t notice me. They just pass by me as if I don’t exist.

If only everyone would ignore me.

Taking a deep breath, I walk into the school, aka the pits of hell, to start my senior year. Black Mountain Academy is supposed to be a private school for the elite, but it’s the same as any other school where the bullies rule and the teachers turn a blind eye.

I used to attend church until I learned hell was a place where your worst nightmares came true. I figured, seeing as I’m already there, I shouldn’t have to bother with walking the straight and narrow.

Keeping my head low, I make my way over to my locker. When I have it open, I huddle closer and hide behind the door.

“Look, fresh meat,” a girl whispers behind me.

I don’t glance at the new student because there’s always a handful every year. They’ll somehow fit in with the other students. It always boggles my mind. How other people can just fit in while I remain an outcast.

Taking a clean uniform from the bag I always carry around with me, I place the clothes in my locker. I’ve learned the hard way to keep extra clothes at school.

Someone bumps hard into my back, and it slams my body against the locker. “Whoops,” I hear Sully, one of the biggest bullies in school, laugh. “Didn’t see you there.”

My muscles grow tense, and I quickly slam the locker shut. I grip hold of the strap over my shoulder, and hunching forward, I attempt to make myself smaller.

“Hey now,” Sully chuckles. He slams his hand against the metal and blocks my escape. Crowding my personal space, he pinches some of my hair between his forefinger and thumb. “Did you miss me, Weinstock?”

I swallow hard, clutching the strap tighter until my fingers turn white. Sully’s the most arrogant person I know. He thinks he's god’s gift to women, and it doesn’t help that he’s always surrounded by a bunch of girls.

He leans down, then whispers, “I sure as fuck missed you.”

A commotion of whispers sounds up, and luckily it draws Sully’s attention away from me. Using the distraction to my advantage, I rush down the hallway. Before I round the corner, I glance back to make sure Sully’s not following me, and that’s when I see what the eager whispers are about.

A new boy. Dark hair and dark eyes. He looks downright scary. Anger’s etched hard into his features, and the nose ring and earrings make him look dangerous. He’s taller than most of the other boys, and the way he walks makes it look like he’s prowling for his next victim.

Which will probably be me.

I disappear around the corner and slip into my English class. At the beginning of the new school year, I always try to be first, so I can get the desk in the corner. I sit down and dig in my bag for my sketchpad. Pulling out a pencil, I open the page I’m busy on, and then I stare at the drawing. I’m working on a shadow image of a woman wading through a shallow lake.

When other students start to trickle into class, I begin to shade the shadowy parts darker.

Someone bumps against my desk, and years of training have my hand hovering over the picture, so I don’t accidentally draw a line through it.

“What the fuck are you drawing?” Michael asks. Just hearing his voice has the hairs on my body rising. Michael Jones is trouble in the worst way. I’d rather face a hundred Sullys before having to deal with Micheal. I’ve heard rumors he raped a girl from a neighboring school, and since then, I’ve done my best to stay out of his way.

Michael places his hand on my shoulder, and his fingers dig into my collarbone until it starts to throb. “Damn, bitch, that looks pretty fucked up. You’re a crazy one, aren’t you?” He leans down, and my body begins to tremble from all the effort it’s taking to sit still.

I want to get up and run. I want to run to the ends of the earth until I no longer have breath in my lungs. And then I want to jump into oblivion.

I feel Michael’s breath on my ear, and it fills me with revulsion. “I have a thing for girls who are into kinky shit, so I might make an exception for you.”