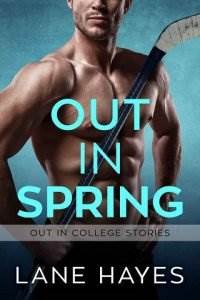 “The true nature of the human heart is as whimsical as spring weather.”—Maya Angelou, The Collected Autobiographies of Maya Angelou

Loud music vibrated through the speakers, making conversation difficult. Not that anyone seemed to mind. People were yelling at each other in the kitchen over the din of a jungle beat, dancing in the living room, and making out…everywhere. Apparently, this was normal behavior at a college party. Gee, I’ve been missing out. Not.

I quickly averted my gaze from the attractive couple sucking face against the staircase railing and bumped Kendra’s shoulder.

She scowled as she pushed her glasses up her nose. “We’ve only been here fifteen minutes, Ned. You promised to keep an open mind.”

“Yes, but the germ quotient is a bit high for me, and I can’t hear myself think. Who are we looking for again?”

“Troy. He’s the goalie, and he’s so cute. I used to have a crush on his friend, Logan. But he was taken until recently. Rumor has it, he broke up with his girlfriend before the holidays,” Kendra whispered loudly into my ear.

It probably wouldn’t have mattered if she’d yelled. We were invisible here—this was a gathering of hockey players and their admirers. I supposed Kendra fit the latter group. And I didn’t get it. At all. My best friend was on a quest to lose her virginity, and she had her mind set on a hockey jock. Go figure. When she went on ad nauseam about their boundless energy, strength, determination, and enthusiasm, I suggested she consider rescuing a golden retriever instead. They were sweet and they actually got excited when you walked into a room. No one here had given us a second glance. Fine by me—I preferred it that way. However, Kendra was here to score.

I had my misgivings. This really didn’t strike me as an ideal environment to procure a beau. I eyed the massive musclebound dude blocking the view into the living area. He laughed at something one of his friends said, then chugged the remnants of his beer before crunching the can in his meaty paw. Ew.

“Please tell me that guy isn’t the goalie,” I pleaded, reaching for a Coke.

“No, that’s Mason. He’s one of their D-men. That’s slang for defenseman. They’re also called blue-liners because their job is to keep the puck in the zone.”

“What does any of that mean?”

“I have no idea. I just googled it. Troy likes to talk defensive strategies with his friends. I’m trying to learn more, so I can have an actual conversation with him about something besides Colby and Sky.”

“Got it. When are they supposed to be here?” I snuck a peek at my watch as I pulled the tab on the soda can.

“Any second now.” Kendra snatched the Coke from me and poured my drink into a red Solo cup. She handed it over with a meaningful look as she pushed her glasses on the bridge of her nose. “Nothing says geek like drinking the mixers at a kegger.”

“No one here is watching me, Kenny. And I’m leaving as soon as your friends arrive anyway, remember? You said you needed me for transportation purposes only. I didn’t think I’d actually set foot in this place. You know I’ve never been to a frat party. If I’d known you’d drag me inside, I would have researched proper attire,” I huffed, glancing down at my oxford shirt and khakis.

“It’s not a frat party. It’s a hockey party. They’re similar in some ways…lots of booze and gorgeous girls fawning over hunky boys. And vice versa. The difference is that these guys are the real deal. They all play for Long Beach. And they’re nearing the end of their season, so this is my last chance to—you know…”

“Fuck a hockey player,” I finished for her.

“Shh!” She smacked my arm lightly before darting her gaze around the crowded kitchen. “I know it’s ridiculous. These girls are so…pretty. I’m out of my league.”

“Hey, don’t say that. You’re beautiful. If I didn’t have a crush on Henry Blackman, I’d ask you out.”

I sighed dramatically. “I know.”

“Hmm. I guess we’re both hopeless cases. Always attracted to the guys who don’t notice us.”

I wasn’t going to waste my breath arguing. She was right. My mild infatuation with my coworker was pretty much on par with Kendra’s obsession with hockey players. Although in her case, I couldn’t understand why she didn’t attract the attention she craved. Kendra was very pretty. She had long dark hair, big brown eyes, and a lovely smile. She didn’t wear much makeup, and she dressed more conservatively than…well, any of the other girls here, but the right guy would see her properly and appreciate her intelligence too. She was a kind soul and a loyal friend. If I didn’t love dick, I’d think we were perfect for each other.