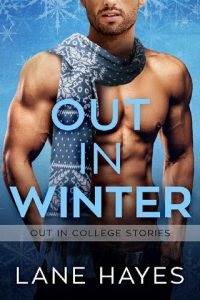 “If winter comes, can spring be far behind?”—Percy Bysshe Shelley, Ode to the West Wind

The sound of clinking glass and rattling silverware echoed in the empty bistro, bouncing off the white-paneled walls, wood farm-style tables, and blue rattan café chairs. Soft conversation hummed from the kitchen. No doubt the owner was consulting with the chef about today’s specials while the morning crew filled the pastry shelves with fresh-out-of-the-oven croissants, brioche buns, and other savory treats. The doors wouldn’t open for the pastry and breakfast crowd for another twenty minutes, but we’d be more than ready.

Well, everyone else would be. I was freaking exhausted.

Months of balancing two jobs plus graduate school had finally caught up to me. The holidays were over, and the café was up and running with a great staff. In a couple of months, I’d be able to give notice at the bar. But now was the perfect time to plan a getaway. The owners, Derek and Gabe, said they’d take over my managerial duties; I just had to be sure we had enough hands on deck. Which translated to wrangling schedules from a dozen water polo players.

Confession. I’d had no idea what water polo was till recently. I wasn’t a total idiot. I knew there was a Speedo, a ball, and a weird-looking cap involved. However, I’d never seen the sport in action. I’d had no clue what the rules were and, to be honest, zero interest in learning….until Derek hired me to manage his bistro and informed me that the posse of new hires would primarily be college-students-slash-water-polo-players.

They were freaking gods and goddesses. No joke. I’d never seen so many tall, toned, and effortlessly beautiful people in one place in my life. For the most part, they were a cool group who’d been hand-picked by Derek’s boyfriend, Gabe.

Derek and Gabe met through the sport and had played together at Long Beach. After graduation, Derek went to culinary school and recently opened a bistro while Gabe trained with the US team bound for the Olympics this summer. He was also the assistant coach at the university and could personally vouch for those he’d suggested as new hires. As a whole, his instincts were on point.

Our servers were a dynamic, diverse, and fun group. Most were typical laid-back Cali beach-types, always ready with a smile and a “That’s awesome, dude.” But we had a few who were—

“Yo, dudes and dudettes. I have arrived! Let the morning shenanigans begin!”

Loud, boisterous, and goofy as hell. And completely fucking adorable in the way gigantic teddy bears were.

I glanced up from my spot at the counter and did a double take before bursting into laughter. “What are you wearing?”

Liam held his arms open wide and glanced down at his odd ensemble as if it were a surprise to him too. He wore Ugg boots, a red-and-black striped scarf, an unzipped parka…oh yeah, and a Speedo.

“I see.” I was going for bored and unimpressed, but I didn’t quite succeed.

That tiny wisp of nylon and Lycra hugged his impressive package without being completely obscene. Impressive indeed—though I had to imagine a serious boner would have to jump ship to get some breathing room. If I weren’t technically his boss, I would have asked how a Speedo contained the average rogue erection. Or did that even happen? And why the fuck was I staring at his junk?

I averted my gaze and yawned, ready to blame exhaustion if he called me out for package-perving. Luckily, he didn’t notice. He’d turned to wave to his coworkers, wrapping forks and knives in white linen napkins at the bakery counter. It gave me a moment to discreetly admire him, and there was quite a bit to admire.

Liam was handsome. I mean…like, wow handsome. He had dark wavy hair, blue eyes, and sculpted features, like high cheekbones and a square jaw that almost always had a bit of scruff. He was an inch taller than my six two, but easily twice my size. He wasn’t heavy or anything—he was thick. He had a big, broad chest, wide shoulders, toned arms, and massive, muscular thighs. I’d always thought swimmers were lean, and most of the water polo players who worked here fit that description. Supposedly his size had something to do with the position he played. I think he told me what it was, but I forgot.

As good-looking and physically impressive as Liam was, his personality was what really stood out. He was…fun. He wore life lightly. He got along with everyone, and if he ran into a person or situation that bugged him, he addressed the issue and moved on. He was our most likable, easygoing employee, and I wasn’t immune.

I wanted to gripe at him for wasting my time with his grand entrance and maybe for being way too damn cheerful before six in the fucking morning, but Liam made it hard to hold on to irritation for long. Like now…