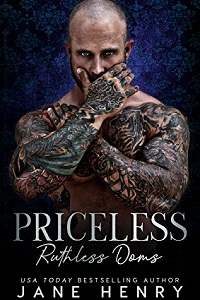 I look at the sea of faces in the cramped, humid high-school auditorium.

Cheerful. Youthful. Full of hope and promise and pride.

But I see past every one of them.

I'm not here to observe the masses getting their rolled-up diplomas and marching off to college, holding flowers from grandparents and parents and boyfriends, posting goddamned selfies all over social media. I've ignored every word the politicians and speakers said, more intent on the conversation around me than anything. I see every eye that looks at her. Everybody within arm's reach.

I know each exit in this school, and every few minutes run my thumb along the cold metal I have tucked into my pants and the knife in my boot.

Ever vigilant. Ever watchful. Because this is my job.

I don't give a shit about anyone else in this place.

The rest are faceless, nameless, my focus on the one girl who stands out from the crowd because of her sheer, vibrant beauty. The belle of the goddamned ball. She's reckless and impulsive and brilliant.

My charge. My ward. The girl I've been commissioned to protect for four years.

The longest fucking years of my life.

Seventeen years old, just two days away from her eighteenth birthday. On the cusp of legal adulthood.

And the daughter of my father's best friend.

Off limits, in every fucking sense of the word.

I've been Marissa's bodyguard since she was thirteen years old. I've stayed in the background, attempting to give her the freedom a burgeoning teen needs, but honest to fucking God, screw that. I failed on that end. I could count every hair on her head. I could tell you the name, date of birth, location, and history of every single damn person she’s interacted with, and every boyfriend knew exactly who I was. I got to know them, too, and each has a folder on file with detailed background checks. Slightly over the top for teen-aged kids, and the files were admittedly slim, but I have no regrets.

She was just a child when we met, innocent to the ways of The Bratva. Ignorant of the work her father did.

And now, as she prepares to go off to college, it's my job to keep protecting her.

But as I watch her walk across that stage, her brilliant smile lighting up the whole fucking Northern Hemisphere, my heart squeezes, and I swallow hard. Jesus, I'm proud of that girl. And I'd give fucking anything to keep that smile on her face.

I look away and school my features. I shouldn't have allowed my admiration to show even for a second. If anyone... anyone suspected how I feel about her...

My phone buzzes, and I ignore it at first, watching as Marissa walks down the stage on death-defying heels she should never have been allowed to wear. I swallow hard as her father embraces her and hands her flowers. She scans the auditorium, as if looking for someone, when her eyes meet mine.

I give her a small nod before I turn away and answer the phone.

Laina, my younger sister, is on the line.

"Do not take your eyes off of her, Nicolai."

I'm instantly on guard. I swivel around to look back at Marissa, my pulse racing when I see her father at first, but I don't see her. She was here a second ago.

"What the fuck are you talking about?" I hiss into the phone as I push my way through the crowd to get to her.

"I overheard something I shouldn't have," Liana says, her voice shaking.

"Tell me." My voice comes out in a choked whisper.

Where the fuck is she?

I knock a lady's bag off her shoulder in my haste to get to her. "Hey!" she says, but I plow on, ignoring the angry crowd I shove aside, making my way toward the front of the auditorium.

"I can't speak freely right now," she says. "I'll call you as soon as I can, but listen to me, do not let her out of your sight."

And then I see Marissa. Bending down to pick something up, then laughing as she adjusts the ridiculous square graduation cap on her head.

I exhale a breath I didn't know I held.

"You fucking tell me what's going on, Laina."

"I'll call you right back."

The phone goes dead. Cursing, I shove it in my pocket, keep my head down, and take my place beside Myron, her father. He shoots me a curious look.

I turn my focused gaze on Marissa. She's walking hand in hand with her motherfucking boyfriend now, and I clench my fist. I hate when he touches her and have had to endure night after night watching her sneak away to be with him. I give her a semblance of privacy. His background's clean, but Jesus what I wouldn't give to break his pretty boy nose for coming near her.