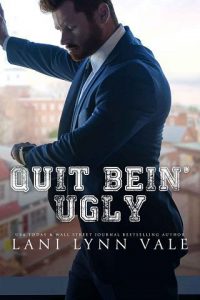 The path to inner peace begins with four words: not my fuckin’ problem.

I was really fucking giddy.

Like, so much so that I was practically bouncing my way through my day.

Tonight, I would be going out on a date with Croft, and I literally could not contain my excitement.

“What’s with that look on your face, girl?” Raleigh, my good friend and a fellow teacher, asked.

I looked over at her.

Not even the shitty kids that I’d just had to deal with could ruin my high.

Raleigh made a disgusted face. “Gross.”

I rolled my eyes and picked up the stack of tests that I would need to take home and grade tonight.

“I’m excited,” I said and looked at her. “This isn’t going to make things weird between us, is it?”

She snorted. “No. Not unless you decide to kick him to the curb because of who his sister is.”

I scoffed. “I like you more than him. If he made me choose between the two of you, you’d win hands down.”

We laughed as we walked out to the parking lot together. “Are you going to the gym tonight?”

She was already shaking her head. “No, tonight Ezra and I have a date for the first time since two-a-days started. We are going out to eat and grabbing some drinks one final time before practice and school officially starts. That means that I have to go get my toes done and my lady parts waxed before I go.”

I wished I could go do that.

But I had to teach a class tonight before my date with Croft.

“That sounds heavenly,” I admitted. “What sounds even better is the idea of getting my toes done and having a pampering day. I don’t think my toes have seen my favorite nail salon in months.”

“You should go with Camryn and me some time,” she urged. “We’re always down for pedicures.”

After making plans to meet the next time that she needed them done, we went our separate ways.

My drive to the gym was short.

Gun Barrel, Texas wasn’t a huge town. But, on one side was the school, and the opposite side was the gym that I co-owned with my brother, Flint.

Flint, who was going on his own date tonight and had begged and pleaded for me to cover the class so he could take his girl out. I’d agreed before I’d agreed to the date with Croft, so I was not reneging on the deal.

Plus, it would get me a couple of slices of cake from my favorite place in town that was only open to the people that made reservations months in advance.

Arriving at the gym, I made quick work of changing out of my work clothes and changing into a pair of tight booty shorts, ones that were extra bright pink and sparkly, and a cut-off t-shirt that showed off my toned arms but didn’t hug my slightly pudgy belly too tightly.

I was just pulling out the equipment that we would need to use when the gym started to fill up with our patrons that came at this particular time.

I was so busy with getting everything ready for the workout that at first I hadn’t noticed that Croft had arrived.

I might have noticed if he’d arrived alone and gone to his regular spot.

But he hadn’t arrived alone.

He’d arrived with a woman.

A woman that was practically clinging to his side, looking intimidated.

I frowned as I saw her place her hand on his arm to get his attention. Once she had it, she didn’t take it off. She left it there with a small smile on her face as she leaned into him and said something.

Something angry and ugly reared its head inside of me, and I realized that it was jealousy.

I was jealous of her hand on his arm.

He was my Croft, not hers!

I quickly turned away, busying myself with pulling out the kettle bells.

It was when I was picking up the fourth one and a half pood kettlebell—yes, you read that right, pood—that he finally made his way over to me.

With her scampering at his heels like a well-trained dog.

“Carmichael,” Croft said as he grinned at me. “How was your day at work?”

Before I could answer, the girl that was stuck to Croft’s ass said, “Croft. It’s rude not to introduce me.”

I felt my eye twitch.

“Oh, shit, sorry, darlin’.” Croft gestured at me. “This is Carmichael. She and her brother own this gym. She’s a local teacher at the high school. Carmichael, this is Karen. Karen is new to our firm and our city, so I thought I’d bring her around and show her all the good places.”

What a fitting name.