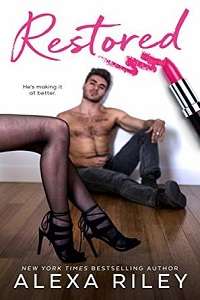 “Think you’ll move?” Roxy tries to glance around my small studio, but I grab her chin and still her movements. She can never sit for too long before she has to do something.

“Stop moving.” She’s the worst to put makeup on. I should count myself lucky she’s letting me do it at all. Getting her into my vanity chair was harder than giving a cat a bath. Not that I have a cat. “I don’t know,” I admit. “Open.”

I unscrew the lid to the lip stain and apply some to her mouth. I don't have any plans to move at the moment because I’m stuck in limbo. I graduated from cosmetology school and I’m freelancing jobs at the moment even though I’ve been doing it since before I got my certification. I’ve always been good at doing makeup and hair but I have no idea where I got the skill set. It’s something I picked up in middle school and it became a little bit of an obsession.

I spent most of my childhood in a garage with my dad. He was a single father who was a mechanic. I know more about cars than most girls. Except Roxy. She’s a mechanic and knows everything about them. She works in the garage I live over, which is the same one my dad owned. I guess I still kind of own it though I take no part in the day-to-day running of it. I only take my cut from the man who took over half of the ownership.

The lawyer who brokered the deal said I was getting more than I should. I don’t know if Bronx was being nice or he didn't want to see the place sold to someone else. I might have grown up around cars and worked on them with my dad but I know nothing about running and operating a mechanic shop. Bronx does and he not only worked for my dad at one time but he went on to open a place next door. He isn't competition though; he does custom work and restores vintage cars. He’s good with his hands.

After Dad's sudden death we both went to the will reading together, even though my dad didn’t have a lot of things to divide up. I didn't know he even had a will until I was going through the motions of losing him. During the reading the attorney shared a note he’d left that said I should look into selling the place. He said he didn't want me to keep the garage if I didn't want it. It wasn’t that I didn't want it; I didn't know what to do with it and feared I’d end up ruining the place. I was fresh out of high school and had just lost my dad. I didn’t know how to run a business. Pile on losing my only parent and I was in no shape to even try.

Bronx made the offer and I think it was why he’d been asked to come. My dad wanted him to be the first to get a chance at buying the place. Bronx asked me to stay on with him and told me I could be a silent partner. The lawyer said it was more than generous for him to make such an offer, and not only that, he let me have the apartment over the shop.

The place was empty since Bronx had moved out; he rented it when he worked for my dad. I knew I couldn't stay in the house I grew up in because it felt too weird without my dad there. I needed a change to help me heal and again, it was an offer I couldn’t pass up.

I should be paying half the rent or something since I only own half, but he won’t even let me do that. I know he does well because his restoration company is super popular. I watched it bloom from a small shop to hosting its own car shows. Roxy told me he’d been offered some television gigs too but he turned them down even though he’s a celebrity around our town.

I put a soft nude lipstick on Roxy and take my time to make sure it’s perfect. If I do any other color I know she’ll try and take it off when I’m not looking.

Maybe I need another change of scenery. I can't live in my childhood home because it feels weird without my dad. But now I’m living in the garage apartment and how is that different?

I prettied the place up, making it my own. Bronx sent over a crew before I moved into it to make sure it was all done right. It’s small but cute and I feel safe here. I know all the employees, and someone is always around so it doesn’t feel like I’m so alone.