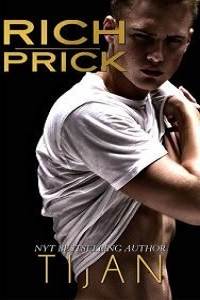 Everyone knew who Blaise DeVroe was.

It didn’t matter that he’d come to Fallen Crest Academy late in the year—and FCA was not a school you showed up late to.

I knew this because I showed up shortly after this year—my senior year—began, and no one, I repeat no one, knew who I was. Since my parents decided to have a mid-life crisis and tried to make up for some of their wrongs and bring me back to Fallen Crest, my last year of high school had sucked. FCA was filled with rich, stuck-up people. That meant you had to speak their language to be in their groups, and I didn’t. Not because I didn’t have money. My parents were movie producers and directors. We had money, and I previously went to one of the most exclusive private schools in North America, and a stint in a boarding school in Europe.

I could be fluent in stuck-up-ese if I wanted to.

But I chose not to. I’ve never been that girl.

I was the library girl.

I was the book nerd girl.

I was the wallflower.

On the whole, I tended to avoid people. I didn’t people well. I had an affinity for blending into the background. It’s a skill. I’d been perfecting it all my life.

But anyway, Blaise DeVroe was the opposite of that.

He may have moved to this school late in the year, but he walked in as if he already owned it. And to his credit, he kinda did.

The guy who ran the school before Blaise showed up was Zeke Allen. He’s this wealthy jackass who’s a bully, a muscular douchebag, and who slept with girls and then talked shit about them. He was king of the school by default, I guess—not because he was anything fantastic.

Then Blaise DeVroe walked in.

Guess who gave him a welcome-home hug? Zeke Allen did!

I was there, just coming out of the counselor’s office, so I saw it all.

Blaise DeVroe strutted in with that cocky walk all the athletes had, and he was gorgeous. Like, seriously gorgeous. He had the high, arching cheekbones only the prettiest of the pretty-boy models had.

I knew this too because I’d done some reluctant gigs in the business.

But back to freaking stunning Blaise DeVroe. He had a chiseled, square jaw. He could have had his own waterfall off that jawline. Dark eyes. His hair was short, but long enough so he could rake his hands through it and let it be all adorably messy. And his body. Don’t even get me started on his body—I was all crushing on it because it was sick and I mean that in the hot kind of sick way, not the real sick way. He was definitely not the real sick way at all.

He wasn’t as big as Zeke, but he had these big, broad shoulders. Trim waist. And there were muscles everywhere. I swear I saw shape definition in his neck.

One of the richest guys too.

I didn’t hear the story of why he came here—not the real reason. Rumors circulated that his mom was going through a divorce, but there were also whispers about secret siblings. I wasn’t on the up-and-up with anyone, so I never heard for sure if any of that was true. All I knew was Blaise DeVroe had walked into the hallowed and pretentious hallways of the private school in our town, and he was hailed like a long-lost son or something.

Or something, as it turned out.

Blaise and Zeke knew each other from childhood. Zeke considered him his long-lost best friend. So it was a coming home sort of situation.

Not that I could talk much about the history of FCA, because I was new myself, but I had been here almost a whole semester before Blaise. And full disclosure, I’d been here when I was much younger at the private elementary/middle school. That was before Mom and Pops decided they didn’t like the influence my older brother’s best friend was having on him, so they pulled both my brothers and me out of here.

But that’s a whole different story.

The story for right now is that I’m being a total weirdo stalker and perving on Blaise DeVroe getting his dick sucked.

In hindsight, this was probably not the best idea I’d ever had. And I’ve had some doozy ideas. But this one takes the cake. I just couldn’t help myself. As I’ve mentioned, I usually keep to myself, but something got into me this year. Every time I heard about a party, I couldn’t make myself go, but I also couldn’t not go.

But I stayed on the outskirts, so the people actually attending the party didn’t realize I was there. There’d been a big bonfire that our town and the neighboring two towns had a while back. I was there, but I’d decided to make it a camping trip—just for me.