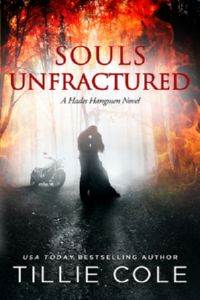 “Did you kill anyone else out here?”

I watched the little black-haired bitch—Mae’s sister—ask Prez if we’d slaughtered anyone else in this motherfucking cult hell.

“Where is he?” she demanded.

Prez didn’t respond, and my head twitched and my skin pricked as her green eyes narrowed.

“Please! I need to see him!” she shouted. Her pale face had gone bright red and her hands had begun to shake at her sides.

Prez pointed into the woods, and in no fucking time, she hightailed it into the trees. My jaw clenched and my hands fisted as I watched her go.

Viking leaned in, stopping just short of touching me. He knew not to fucking touch me. “You carved that fucker up Krueger style, didn’t you, brother?”

I stayed staring at the woods, catching the bitch’s dress disappear in the distance.

My teeth gritted, remembering piercing that fuck with my blades and I snarled. “I fucking hacked him up good. That bible pedo fucker deserved to die like that.”

“So that’ll be a yes. A huge fucking yes to the extreme makeover, Krueger edition.”

But I didn’t respond to Viking. Didn’t respond because the black-haired bitch was walking back out. And I watched her all the way. I counted her every step as she moved closer. One, two, three, four, five, six, seven, eight, nine, ten, eleven…

I watched her chest rise and fall. She was breathing hard. She was fucking breathing so hard. Surely she wasn’t pissed that the disciple pedo was dead?

“Sister?” Mae ran over to her, but the little bitch’s green eyes were on Prez.

“Who killed him?” she asked, pushing past Mae. Her face moved from one brother to the next, looking each in the eyes.

And I stared. I stared and I twitched, and felt my blood begin to boil.

The fucker had deserved to die. I’d fucking got hard watching that fucker die. I’d watched the life leave his eyes. I’d watched his blood spill. And I’d motherfucking loved it.

Then the little bitch reached me. Her tiny frame stood below me and those huge green eyes looked right up into mine. “Was it you?” she asked.

My blood rushed faster through my body, and I nodded my head. “Yeah, I killed the fucker,” I spat.

I tensed, my muscles jumping, waiting for her to defend that cunt. To tell me I was evil, wrong and a killer—shit I already knew.

But before I could fucking think, a cry left her throat and she jumped forward and wrapped her arms around my waist. My heart fired in my chest like a fucking cannon and my hands fisted and rose into the air as her hands touched my skin.

I couldn’t be touched. I couldn’t be fucking touched. One, two, three, four, five, six, seven, I started to count, waiting for the flames to hurt her. Waiting for the pain… eight, nine, ten, eleven… My eyes snapped down as I reached eleven, expecting to see her pain.

But she wasn’t hurt.

The little bitch’s arms tightened around my waist and I looked down in shock. I saw her thick black hair. I saw her back rise and fall with her breaths.

“Thank you,” she whispered and pressed her cheek against my chest. “Thank you so very much.”

My lungs froze as she thanked me. But I didn’t understand. Like always. I didn’t fucking understand anything.

Why wasn’t she hurt from my touch?

Why was she fucking thanking me?

Heart still pumping from the rush of the kill, pulse slamming in my neck, I squeezed my eyes shut. Forcing my arms down, I took a deep breath, and pressed my hands to her back. As my hands touched the material of her dress, I sucked in a breath, feeling her body jump under my palms.

I almost pulled back, the feel of her in my arms fucking with my mind. But that was shot to hell when I felt wetness on my chest, on my skin, and the bitch, cried, “You freed me. You freed me from him.”

At those words my eyes snapped shut. My heart sprinted in my chest, but the flames in my blood, the heat in my blood, was calmed.

I wanted to grip her tighter.

I wanted to hold her closer, but then she dropped her arms and pulled away.

My hands clenched at my sides as I watched her go, then just before she reached her sisters, she looked back at me and asked, “What is your name?” Her voice was shaking, like she was scared. But her eyes never left mine. They fucking burned into mine, making my heart pound.

Then I thought of that question. My name…

“Flame,” I said, pushing my other name far from my fucking mind, the name I couldn’t stand.

I froze as she dipped her eyes and smiled. My fingernails dug into my palm, so I could fucking try and stay calm at that smile. “You have my eternal gratitude, Flame. I am forever in your debt.”

The air blew out from my mouth as she turned and walked away, but I couldn’t stop staring at her.

My eyes dropped to my hands and I stared at my palm. I’d touched her. I’d fucking touched her and I hadn’t hurt her.

Then my stomach fell. Because the flames were still under my skin. I could feel them. And if I touched her again, I could hurt her.

“Fuck man, you alright?” AK stood in front of me blocking my path to the little black-haired bitch.

AK nodded. “I know, brother. You doing okay? You’re not gonna go psycho on her ass, right? No thoughts to slit her throat going through that head?”

Moving to the side, I looked over AK’s shoulder and asked, “What was her name? What the fuck did Mae say her name was?”

AK glanced back too and said, “Maddie, I think?” He took a deep breath. “Yeah, Maddie.”