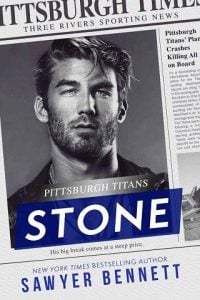 “Stone.” Something slaps my arm. “Stone… wake up.”

“What?” I mumble, refusing to open my eyes. My tongue feels like it’s fucking glued to the top of my mouth.

“Your damn phone keeps ringing.” Female voice coming from the other side of the bed. Not all that surprising after a bender evening out.

I raise my head, a searing pain jolting through it. It’s dark and I’m disoriented, but I do hear my phone ringing on my nightstand.

Rolling that way, I nab it and squint to see who’s calling.

“Fuck that,” I mutter, tapping decline.

Tossing the phone back on the nightstand, I close my eyes and try to will the pounding headache away. I had way too much to drink last night, so much so that I honestly have no clue who’s lying in my bed.

Nor do I care.

“Turn the fucking phone off,” the woman whines grumpily, and I can make out her shadowy form pulling a pillow over her head.

I grab the phone, intent on doing just as she asked. It’s my father calling again, but it finally penetrates that it’s just past two a.m., so it has to be something bad if he’s calling me at this hour.

Hell, I’d probably think it was something bad if he called me in daylight hours too. He just doesn’t reach out at all.

Despite the headache and slight buzz, I make the choice to answer.

“Yeah,” I say into the phone, my voice thick with sleep and too much beer. I cough to clear it. “What’s up?”

“Oh God,” my father wails into the phone, and it’s so full of anguish that my stomach rolls.

I fly up from the bed, swinging my legs around and fumbling with the lamp. It lights up the room, and I’m vaguely aware of the cursing woman behind me in bed.

“What’s wrong?” I demand, but I’m not sure he hears me. My father is moaning piteously, crying and sobbing.

“Dad!” I yell, trying to get his attention—trying to talk louder than his sobs. “What the fuck happened?”

“Jesus Christ,” the woman snaps, and I glance back at her. “Can you take that call somewhere else?”

I’m normally an easygoing guy, but something life altering is happening. I’m coming off a drunk, and I have a father I barely talk to on the phone, crying about my brother. Some strange woman is in my bed—who I clearly brought home and fucked, seeing as how we’re both naked—and she’s telling me to go somewhere else.

“GET THE FUCK OUT OF MY HOUSE,” I roar, and no matter how loud that was, my dad’s crying is still somehow more clamorous.

The woman’s eyes bug out, and she scrambles off the bed, grabbing the sheet to cover herself. As she gathers her clothes from the floor, I give her my back.

He says nothing. Only whimpers.

My heart rate is so jacked, I’m afraid I’ll stroke out. “Dad!” I scream at him, punching the wall and denting it. “Goddamn it. What’s wrong with Brooks?”

“No.” It can’t be. No fucking way. My heart twists, possibly tears in half.

My dad is sobbing again, and he sounds like a damn child. Completely useless, but I’m not without means to determine what’s going on. I snatch the remote from the nightstand, aim it at my thirty-two-inch TV on the dresser, and power it on. Because all I watch is ESPN, that flares to life, and I stare in horror at what looks like footage of a helicopter flying over… well, I’m not sure what.

It’s dark, but there are dozens of flashing lights. Police, ambulances, more fire trucks than I can count. And various chunks of something scattered about, blackened by fire.

It finally comes to me… I’m looking at an airport. I can see the runway lights, and my eyes focus not on what the reporter is saying but rather on the scrolling banner at the bottom.

I stumble backward, vaguely aware that my bedroom is empty and the woman must have left. The backs of my legs hit the mattress and I sag onto it as I stare, disbelieving, at the screen.

My dad still cries on the phone. He says Brooks is gone.

Not dead, though. They’re reporting that they’re searching for survivors.

“Dad,” I bark into the phone, “have they found Brooks?”

“The TV is reporting they’re looking for survivors,” I point out, turning up the volume so I can listen.

That seems to jolt him as he starts talking. “We’re watching too. The plane is destroyed. No one could have survived that. No one.”

My dad breaks down into sobs again, and I pull the phone away from my ear. I can’t stand to listen to him mourn Brooks when we don’t know for sure if he’s dead. There are ambulances out there. Rescuers searching.