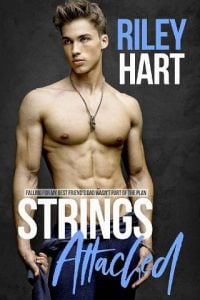 I really, really wanted to get laid.

To be honest, that was nothing new. I wanted to have sex most days, but it wasn’t a burning constant beneath my skin the way it was now. Usually I was fine just rubbing one out. While I loved sex, I wasn’t the guy who hooked up a whole lot. When I wanted it, I found it—someone from an app or on the rare occasion, a club—but typically, I didn’t have the fucking time to think that much about sex between getting my degree in teaching, trying like hell to get the best grades possible, managing my ADHD, oh, and working as many hours as I could squeeze in.

But I had something to celebrate, and that called for flesh on flesh—sweaty bodies, hungry mouths, and searching hands.

I deserved that, didn’t I? Especially since I’d never thought this would ever happen, that I’d actually walk across the stage and get my degree. I was the first person in my family to graduate from college, and while that might not seem like a huge feat—considering the only family I had a relationship with were my mom and my twelve-year-old sister, Molly—it meant something to me. It meant everything to me.

I rolled over in bed, trying to get comfortable. I really wished Mom could have come out. But her back injury from a few years ago made it difficult for her to sit in the car for long hours… Plus, the car was shitty and money was tight. I got that. I was the last one to put big expectations on people when it counted on them having funds. I rarely had any myself, despite working since I was fifteen. If it wasn’t for the massive amounts of loans I’d taken out, along with the grants and the scholarships I’d worked hard for, I wouldn’t have been able to afford college at all. Unfortunately, I’d had to get a credit card too, which I was trying to pay down.

Instead of coming to Chapel Hill, I should have stayed in Placerville, Georgia, where I grew up, and gone to a community college there. It would have been so much cheaper, but fuck, going away to school had been my dream since the moment I learned that was something people did. I’d wanted it so fucking badly, and now I’d just…spend the rest of my life paying it off…

On a teacher’s salary…

My heart rate began to sprint. My palms got a little sweaty. Why had I gone into teaching? Why hadn’t I done something where I’d make more money, to be able to support myself, Mom, and Molly? Which was what I’d always wanted…but I’d always wanted to be a teacher too. God, a part of me needed it.

I shoved those worries aside, determined to go out and have fun for once. Tonight I’d forget about all my responsibilities and guilt—that I’d left Mom and Molly to follow my own dream, that I was massively in debt. All I wanted was sex and maybe to get drunk. Was I allowed to think that, considering that in three short months I’d be molding young minds in the classroom? I mean, teachers were people. They had sex and got drunk like everyone else.

My phone buzzed from its perch on the nightstand. I rolled over and picked it up to see Ross’s name on the screen.

My dad just got into town. Want to go to dinner with us?

Ross was my best friend. We’d only met about a year and a half before, at school, but he was a great guy, a ton of fun, and I loved spending time with him. Sometimes, though, he didn’t get that our lives were different. His dad made bank—shit, did teachers say things like that? He owned four car dealerships in Georgia, and one of them was waiting for Ross to take over.

I knew Ross’s life hadn’t always been as easy. He and his father had their share of hard times. His dad had him young—he was only eighteen when he got his high school girlfriend pregnant—and neither of them had any real family. They’d tried to make it work, but Ross’s mom wasn’t into it and bailed. I’d never met Ross’s dad, but he must be a fucking superman miracle worker or some shit. He’d raised a son on his own while going to college and working, making his way up in a car dealership of all places, and eventually, he became the owner of four of them.

Ross didn’t remember what it was like not to be able to go out to dinner because his dad had bills to pay, and if I told him, he’d offer to cover it and I’d look like a jackass, which wasn’t my style.

I’d already agreed to be his roommate in Atlanta because the price couldn’t be beat. His daddy owned the place, and we wouldn’t have had to pay rent at all, but I’d refused that offer. However, the low amount he’d then given me was too good to pass up. I was independent, not stupid.