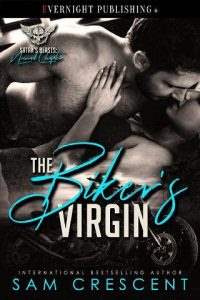 “Let me go!” Piper Dawes fought against the drunk man. He was too strong; even though he was inebriated, she couldn’t fend him off.

Dave had never been a nice man sober, but drunk, he was even worse. All she’d been doing was taking out the trash and he’d cornered her. Everyone in this small town judged her exactly the same as they had her mother and sister. Both of them were known as whores of the town. They spread their legs faster than … anything that could spread their legs. She was expected to do the same, even though she was still a freaking virgin and didn’t look at men like they were anything. They were all pigs and she should know. There had been countless times where she woke up in the trailer she shared with her family to find strange men. Some of them even married and supposedly church-loving men.

Most of them were hypocrites. Where her mother and sister thought it was funny to be the gossip of the town and to know so many dirty secrets, she detested it. Splitting her time between the bar and the diner, she got her fair share of nastiness thrown her way. She hated her life here, but so far, she hadn’t saved up enough to leave.

The trailer, the rumors, the gossip, she loathed it and wished with all of her heart she wasn’t part of it. For once, she wanted to be her own person, without the stench of her family tainting her life.

Moments like this made her want to take the plunge and leave all of this bullshit behind. Something needed to happen. She couldn’t stand for any more of this, men cornering her as if they had a right to her.

“You really think you’re better than us?”

She wanted to scream she was better than all of them, seeing as she hadn’t tried to attack him, but she had a feeling that would have fallen on deaf ears. He was too drunk.

His hand touched her breast as his other hand went around her neck. He shocked her still as he started to squeeze, cutting off her air supply, making her panic.

This couldn’t be happening. Fear ran down her spine as Dave seemed more interested in what he was doing to her body.

I’m going to die. She clawed at his wrist.

He winced, letting her go. She touched her neck, feeling the panic grasp her tightly. She had to get away from him.

She’d spent way too much time in her fear.

“You fucking bitch.” He backhanded her.

She dropped to the ground with a scream.

“I’m going to make you wish you’d just stayed still and took my dick. I know what you whores want. What you crave.”

“Yeah, and what I see is a woman who doesn’t want your touch.”

Piper frowned. It wasn’t a voice she recognized, but it was dark, rough, almost as if he’d smoked too many cigarettes. Her head throbbed. Dave had hit her good. She groaned.

“Look, asshole, this is none of your business. She’s the town slut. All of her family spread their legs for the locals.”

She gritted her teeth, sitting up.

“Doesn’t look that way to me. Last time I checked, you didn’t need to hit a willing female. Believe me, I’ve had plenty of those dancing on my dick during my time.”

She looked past Dave and saw one of the tallest men she’d ever laid eyes on. He was huge, must have been close to six-foot-two, maybe even taller. He wore a black leather jacket and his face had several days’ worth of stubble, but he didn’t appear unkempt or dirty. What also surprised her were the men behind him. All menacing, each wearing a leather cut. Just past them, she saw the bikes. All big, powerful-looking machines.

“Look, clearly, you’re passing through. Why don’t you leave, and I won’t kick your ass?”

The man, whoever he was, spat on the ground and smiled. His teeth were white and even. Why did his smile look scary and sexy at the same time? That didn’t make any sense. She shouldn’t notice these things about anyone.

“Why don’t you throw your best punch and I won’t kill you? How about that?” he asked.

“Fine. You need to be taught a lesson.”

Dave was an idiot. He ran toward the man and he didn’t even get one punch in before he was on the ground moaning.

“Fuck you.” Dave got up. He was back on the ground seconds later, moaning again. This time, Dave didn’t get back up.

“Holy shit, Colonel, look how fast he went down.”

The man she guessed was called the Colonel stepped over Dave and approached her.

Would this be bad for her? Had this mystery man saved her to finish what Dave started? Her heart raced and she watched him, quickly moving to a stand to keep a close eye on him.