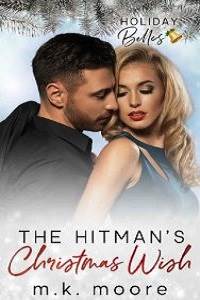 My childhood was a stark contrast to my current reality. Growing up in Westchester, New York, I never thought I’d end up here. My family was wealthy. They made their fortune just before the stock market crash in the twenties. They safely managed to horde through the Depression and let it grow after. They invested in a fashion line that people still buy to this day. It wasn’t until I was in high school that I found marksmanship as an extracurricular sport. I was always good at hunting, but this really honed my skills. When I graduated high school sixteen years ago, I met Albie Vitali at the social club our fathers belonged to, and the rest is history. Given what I do, most people expect that I grew up in the gutter, committing crimes since the day I was born, but that couldn’t be further from the truth. In reality, I’ve never had so much as a parking ticket.

I went from prom king and class president to being a highly sought-after sicario or hitman. I work exclusively with the Vitali’s, but other family’s want to utilize me. No amount of money could make me betray this family. Loyalty means something to me, and I took an oath to honor this family and fight for it as well as my own. My family knows what I do, but we don’t talk about it. My father is an accountant for the family, and we don’t talk about that either.

My first kill was the hardest, but I guarantee nothing will ever get traced back to me. I am in and out in under five minutes. If I’ve been called in, nothing else has worked. The end is near, and the marked men know that. I don’t listen to pleas or excuses. My method is two clean shots to the head. I allow a deathbed plea to God, but that’s it. Then I am out, back out into the darkness of wherever I happen to be. Have gun, will travel is my motto. In sixteen years, I’ve killed one hundred and twenty-six men. Men who deserved to die. Men who could not be redeemed. Those are my only hits. I don’t deal in anything else, and the Vitali’s respect that. They don’t deal with anything else either. I am confident that’s why we work so well together. I mark my kills with a tally system on my back. My chest has my only other tattoo. The name Bella with a crescent-shaped moon is emblazoned there. The object of my affection doesn’t know it yet, but I am coming for her. The first thirteen years of working for the Vitali’s consisted of burner phones and no contact between us. I didn’t even know Fabrizo, my boss, had kids until about three years ago. Two years ago, a rival family kidnapped Fabrizo’s youngest daughter, Bella Luna.

Of course, I offered to help. The kidnapper had a three week head start before I was called in. I didn’t expect she’d be alive when I found her. After searching twenty-plus abandoned warehouses, I found her. Starving, beaten, and so dirty, I couldn’t see her skin. I lifted her in my arms and carried her out to my car. I murmured reassuring things to her the whole time, but I don’t think she believed me until we pulled down the long driveway of the family compound in Queens. Something tugged at my heart that night, and nothing has been the same since. I am the same ruthless sicario I once was, but I’ve changed. Grown.

It should be no surprise that I’ve come in contact with the family so often after bringing her home. From the car, I carried her to her mother. Being so young, Bella Luna shouldn’t have captured my attention, but she has, and she's finally eighteen. Obsessively, I have fallen in love with her even over family dinners and outings. She is a breath of fresh air and the light to my darkness. Like a creepy fucking bastard, I've counted down the days until I could make her mine. She’s gorgeous, but more than that, she’s kind, caring, and gentle, everything I am not. As I walk into the main house, there is no one around. That's odd. There's always someone milling about. Instantly, I'm on guard. My hand reaches for my gun. Unbuckling my hip holster, I put my hand on Donnatella, my Sig Sauer P226, and walk through the foyer back into the kitchen. Son of a bitch. I choke on a tortured groan.

Inside the kitchen, Bella is leaning against the island, completely naked. My heart is in my throat, my dick gets hard, and I cannot speak.

“Alonzo,” she says, her voice huskier than usual. It goes straight to my dick.