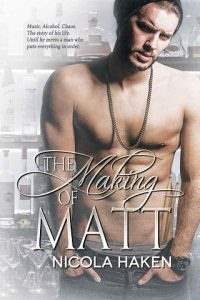 “UGH,” I GRUMBLED, shrugging away whatever the fuck was nudging my shoulder.

“I said get the hell outta bed! The wedding starts in a half hour!”

“Shit!” Leaping out of bed I barged straight past Alex and into the en-suite. “Why the fuck didn’t you wake me?”

“I did! When I left the hotel almost two hours ago you said you were getting up.”

“That was two hours ago?” Jeez, it’s amazing how quickly time passes when you’re sleeping.

Kip and Elle were getting married today. They’d been planning it for the last twelve months and I was glad it was almost over so Elle wouldn’t be able to bore the shit outta me with freakin’ bridal magazines anymore.

“It’s not my fault,” I protested around a mouth full of toothpaste foam. “I’m jetlagged.”

“Well my body’s extra sensitive. Still don’t see why they couldn’t just get married back home.”

“Because it’s not their home. They’re both from London. All their friends and family are over here.”

By this point I was hopping through to the bedroom, pulling on my underwear with one hand and shaving my face with my electric razor with the other. I preferred the electric version. I liked the light layer of stubble it left behind that, if it were possible, made me look even hotter.

“Grab my suit,” I said, setting down the razor and picking up my cologne from the nightstand. Huffing, Alex padded toward the closets, only to turn straight around when he opened them.

“There’s nothing in here. Please tell me you remembered to pick it up yesterday.”

“Never mind what I said. What the fuck am I gonna wear?” I let out what could only be described as a growl before rubbing at my puffy, tired eyes. “You’re gonna have to go get me another suit.”

“I’m not your bitch, Matt. Besides, there’s no time. The car will be here in fifteen minutes.”

I sighed, running my hand over my face. “Fuck.”

“Just throw on some jeans and a vest. To be honest, they’ll probably be expecting it.”

“What’s that supposed to mean?” I snapped. We argued a lot lately and I didn’t really get why. Whenever we were together for too long I started getting restless and on edge, which was bizarre because I thought of Alex as my very best friend.

“It means you’re unorganized and unreliable and everyone knows it.”

With no other option, I rummaged through my suitcase until I found a pair of dark jeans and a white vest. I coupled it with a smart jacket – not quite wedding attire but it would have to do. I wasn’t unreliable, just… industrious. That means busy, right?

Once I was as presentable as I could be within ten minutes I took what felt like my first breath of the day. It was only then I really looked at Alex and realized how smart he looked.

“Wow. You look kinda hot, dude,” I complimented, eyeing his sharp gray suit up and down. I found myself flirting with Alex every so often, partly because I flirted with everybody and partly because it made him smile. I liked that. He was my friend, seeing him happy made me happy.

“Not too bad yourself.”

“Goes without saying,” I agreed, combing through my hair with my fingers. It’d been years since I sported my natural color. The girls dug the dirty-blond look. But since I lost my hair in a bet last year, I didn’t bother bleaching it again as it grew out. So now I was my own light-brown. Turned out the chicks liked that, too.

Less than half an hour after I got out of bed, we arrived at the church. When we got out of the car Alex took one last disapproving look at me before snickering to himself, and then I followed him inside. It was an old-fashioned type of building. Very British. Like the kind of building you would’ve seen on Downton Abbey or Miss Marple, or any other of the shit TV shows Alex liked to watch – old brick, stained glass windows and a steeple. I didn’t like churches – I never had. They were creepy places. Eerie. I always felt like I was being watched by someone I couldn’t see and it left me feeling unnerved.

I walked up toward the front of the church where I saw Sawyer and Jake sitting on the first pew. Ryder and Mason were on the opposite side, along with Kylie – Elle’s sister – and a bunch of old people I’d never seen before. When Sawyer saw me, the sarcastic bastard looked at his watch, exaggerating the move, before raising an eyebrow. I ignored him, choosing to go straight to Kip and wrap one arm around him, clapping his back.