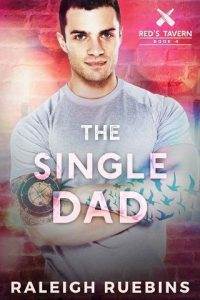 “Okay, I need a six-letter word for bent over.”

“Folded,” my brother Perry said. “Like what this place is going to be, if I don’t get back in the kitchen soon.”

“Fucked!” another voice said from behind the bar, which I immediately knew belonged to Sam.

“This is the local Sunday crossword puzzle,” I said. “I’m pretty sure they’re not going to have one of the answers be fucked.”

“Cameron, the answer is always going to be ‘fucked,’” Sam said, winking at me before strutting across to go help a customer who’d just sat on the other side of the bar. Sam still had a flower tucked beside his ear, placed there by the last customer he’d flirted with.

I looked at the six blank spaces. “Folded is good, but it doesn’t fit,” I murmured. “The third letter is a G.” The din and chatter of Red’s Tavern surrounded me—people trying to find hookups, get wasted, and have the best night they could.

But I wasn’t doing any of those things. I wasn’t going to hook up or date for a very, very long time. I was focusing on one thing at a time. One day at a time. And right now, that was this crossword puzzle.

“G?” Perry asked. He bit his lower lip, lost in thought. My brother was good at a lot of things, but puzzles had never been one of them. Growing up, he’d been like a father to me—cooking us meals, hanging out with me when Mom was away at work. But I’d always been more of a brainiac than him. I was better with numbers, better at computers, and definitely better at all games and puzzles.

“I’m starting to think this puzzle is out to get me,” I said.

Really, I knew the truth. I had sucked at doing puzzles for a while now. Especially since last Thursday, when my divorce was finalized. I was off my game in a big way. But I knew the only way to get past it was to keep going. I wasn’t going to stop for anything.

Back in the day, I would have texted Rachel a picture of the puzzle, and she would have come up with the answer in two seconds flat. Rachel was always good like that. Sharp as a tack. It was why she was so great at her job—a shrewd lawyer who fearlessly fought against environmental injustices.

And it was also why she had been swift, methodical, and quick as hell to end our marriage. We’d only finally decided to get divorced a few months ago, and now I was sitting here at the bar, a single man. I hadn’t even known it was possible to get divorced so fast.

Of course, I’d known for at least a year that our relationship had problems. Big problems. But that didn’t mean it felt any less weird to be sitting here alone, at a gay bar, as a single man.

“Perry, we’re gonna need a round of sliders,” Red said, appearing behind the bar.

“Cameron,” Sam said, appearing again behind the bar. “Please tell me you’ve been active on the app.”

People had always called me a ray of sunshine, but Sam had even more energy than I did. He was young, fit, and always bouncing around behind the bar, flirting with some guy. He wore tank tops almost daily, and sometimes had glitter on random parts of his body. He’d taken pity on me since finding out about my divorce, and had made it his sole mission to play Cupid for me.

He was a sweetheart. But for the first time in a long while, I didn’t have the energy to be a ray of sunshine back to him.

He looked at me like I was a sick puppy. “You haven’t even looked at the app, have you?”

“But I’m tired of seeing you so mopey and sad around here,” Sam protested.

A few nights ago, Sam had convinced me to join a singles app called BackOutThere. It wasn’t technically a dating app, but more of a local group chat, specifically designed for people who were newly single and wanted to “get back out there.”

Some people used it to find dates. Some just used it to talk and commiserate. Some, inexplicably, seemed to only use it to post photos of their pets, which I wasn’t complaining about. I sure as hell wasn’t looking for dates. But I’d signed up for the group right here in Kansas, and it had seemed to get Sam off my back for a couple of nights.

“I think the app is perfect for you,” Sam said. “You’re a techy kind of guy to begin with. Don’t you fix computers for a living?”