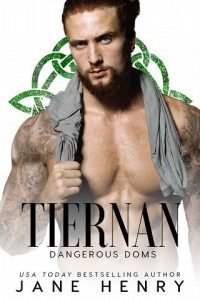 The slightest sliver of sunlight peaks over the bluish green waves of the Irish Sea. I shiver and quicken my pace along the beach for my warm-up. It will only take another minute before my whole body’s warmed through, but the faster pace will help.

It’s quiet in the morning, the only sound the soft lapping of waves on the shore and the padding of my trainers on the damp sand. It’s my favorite time of day.

My breath comes in short, ragged gasps as I speed up my run. The end of the beach is in sight, but it’s not where my run ends. I jog up the rocky steps that lead to the streets of Ballyhock, and run along the path that takes me home, the McCarthy family mansion that overlooks the Irish Sea.

My routine’s like clockwork. My alarm goes off before the sun rises. I toss on my workout clothes, hit the beach for my morning run, and when I’m good and warmed up I jog back home to the workout room. I lift for an hour, shower, then join the brotherhood for breakfast most days.

I’m the enforcer for the McCarthy family Clan, and I don’t take my job lightly. I need to be in peak physical shape. As one of the youngest inducted men in the brotherhood, they depend on me. They took me in when I was only a lad, and I won’t ever let them down.

I jog along the streets of Ballyhock centre, the long way home to ensure I get a long enough run in, when someone steps straight in front of me. I come to a screeching halt, and my temper flares. What kind of a prick stands in front of a man on a run?

He wears a hood to cover his face, his hands shoved into his pockets. I’m on immediate alert.

“What the fuck are you doing?” I mutter. My instincts are on alert. I don’t carry weapons on a run, but I often don’t need them now. I’ve been trained well enough to know how to use my body as a weapon.

He lifts his head and meets my eyes, tossing his hood aside.

“Getting your attention,” Danny Cook says, and I stifle a groan. Danny grins at me, his unabashed smile revealing missing teeth. He’s got the classic face of a man nearly raised in the ring—a nose that’s been broken and reset too many times to count, silvery scars along both cheekbones that even his five o’clock shadow doesn’t hide, and a twitchy stance as if he’s constantly readied on the balls of his feet, ready to throw a punch.

There was a time when I brawled for extra money, though I know now it was more to prove my worth to the men of the Clan. I was so good in the ring, trained well at St. Albert’s, the Clan’s finishing school, in the art of ealaíona comhraic. My brothers of the Clan helped train me in the Irish martial arts as well. But my specialty lies in dornálaíocht, boxing.

“Why do you need my attention?” I scowl at him. Though I left the ring on friendly enough terms, it was only because Keenan, clan chief and father figure to us all, insisted.

“You’re the best fighter we’ve had in decades,” Keenan said at the time, “but that’s exactly what concerns me. You’re in the public ring like that, and fights get messy. An enemy could take advantage easily.”

I knew he was right. I made myself too easy a target. And though every citizen of Ballyhock knows exactly who we are and what we do, they turn a blind eye toward the darker side of things, for we do our best to be upstanding citizens for all intents and purposes. It isn’t the Ballyhock citizens we’re wary of, though, but our enemies. As the most prominent mob in all of Ireland, we’ve many enemies.

So I left the ring. I threw myself into every job Keenan gave me. Informant in Boston, international tasks, Clan enforcer. Cormac, second in line to the throne, inducted me to take on his role when he became co-leaders with Keenan. The Clan had grown, Keenan said, in such numbers with both extended family and newly inducted members, the job of clan Chief could no longer be relegated to just one.

It wasn’t just that, though. I’d earned a reputation as the most agile fighter in the lot, skills necessary to enforce for the Clan.

I sidestep and begin jogging again, but the fucker keeps stride beside me.

“There’s thirty k on the table, Hurston, win or lose.”

As a clan member, I’m financially set for life, but old habits die hard. I was raised in abject poverty until the McCarthy Clan took me and my siblings in when I was a sixteen-year-old lad. Sixteen years having to fight for your food and a roof over your head either makes or breaks you, and you don’t forget what it’s like. I well remember my belly gnawing with hunger, the cold draft of wind that seemed to pierce straight through the thin walls of my childhood home, the ratty clothes I wore that other kids poked fun at.