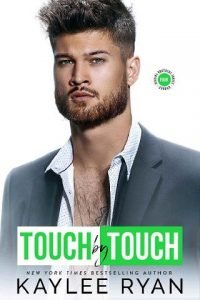 The chime on the door sounds, and I look up to find my future brother-in-law, Grant, walking toward me. He’s wearing the same face-splitting grin my big sister, Aurora, has been wearing the last month. I can’t tell you how many times I’ve caught her staring at the rock he put on her finger on the Fourth of July when we all went away to the Riggins’s family cabin in the Smoky Mountains.

“Hey, Aspen. How are you this fine Friday morning?”

“Fine as frog hair,” I reply, causing him to chuckle.

“Do frogs even have hair?” He immediately puts up his hand to stop me from answering. “Never mind. I don’t want to know.” He chuckles. “Is Aurora in the back?”

He groans in response, mumbling something about his girl smelling sweet, and disappears into the kitchen.

I get back to work, wiping down the counter from the morning rush. I’m just putting the cleaner away when the door chimes again. When I turn around, I see Marshall Riggins, one of Grant’s younger brothers, standing at the counter.

“What kind of delicious concoction do you ladies have for me today?” he asks, rubbing his hands together with anticipation.

“You know, if you keep making daily stops in here, you’re going to have to start hitting the gym a little harder.” I pat my flat belly, making him laugh.

“It’s worth it. Besides, I have to support my future sister-in-law.”

“And what am I, chopped liver?”

He taps his index finger against his chin, pretending to ponder my question. “You’re the bonus, Steele,” he finally announces. “We get Aurora and you, and my belly thanks you.” He bows, and I can’t hold in my laughter.

“He wants one of these,” Grant announces as he exits through the kitchen door to join us with a cinnamon roll in his hand. “Trust me.”

“If the Steele sisters made it, I’m in. I’ll have what he’s having.” Marshall points to Grant’s hand.

“Here.” Aurora appears, passing him one. “Fresh out of the oven. It’s still warm.” Marshall takes it from her and leans in to kiss her cheek. He does the same to his brother.

“What the hell, Marsh?” Grant asks, wiping his hand across his cheek as if his brother just gave him cooties. “And keep your mouth away from my wife.”

“Oh, she’s not your wife yet, brother. I still say she’s going to wise up and pick the youngest Riggins.” He points to his chest before taking a huge bite of his cinnamon roll.

“I kind of like the middle man.” Aurora stares up at Grant with so much love in her eyes.

“I love you,” Grant tells her. He has the same look in his eyes as he smiles down at her.

“And here I thought the cinnamon rolls were sweet,” Marshall jokes.

“Nothing here at Warm Delights has anything on the sweetness of those two,” I tell him, motioning toward our siblings.

“Hello,” Marshall says, bringing his phone to his ear. “I’m at the bakery,” he tells the caller. “Sure. Yep. I’m on it.” He ends the call, sliding his phone back into his pocket. “That was Sawyer. She wants something sweet.” He smiles, shaking his head. “Box me up some of these.” He pops the last bite of cinnamon roll into his mouth.

“Coming right up.” I pull out two boxes and fill them up. The rolls are pretty big, though I know one box won’t be enough for all five Riggins brothers as well as Sawyer and Layla. Grant and Marshall might have had a taste here, but they won’t stop there. I don’t know how all five of them stay in such great shape, considering how often they stop here for a treat. Not that I’m complaining. Daily eye candy is not exactly a hardship. However, there are only two brothers who are available—Marshall, the youngest, who is my age, and Conrad, who is two years older than me. I feel guilty ogling the others because I love their wives, and well, Aurora is my sister, and I can’t be creeping on her man, no matter how innocent it is.

“I need to get to the office,” Grant tells my sister. “You pick a date yet?” he asks her, kissing the tip of her nose.

She throws her head back in laughter. “You asked me that this morning before I left for work.”

“Dude, you were up at the ass crack of dawn just to ask her if she’s set a date yet?” Marshall asks. By the tone of his voice and the pained expression on his face, he clearly doesn’t feel like that’s something he would do.

“Just wait, little brother.” Grant smiles easily. “You’re going to find her, and you’ll realize that you’ll do anything for a few more minutes of her time. And to get her to set a wedding date.”