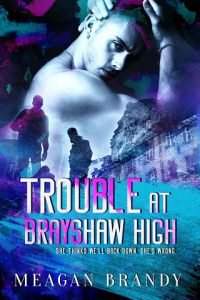 I grip the ends of my hair and pull, trying to lessen the pounding at my temples. My body and mind are exhausted, and my head is taking the heat from it.

It doesn’t help a damn thing, so I drop onto the bar stool and look to the clock.

It’s past three a.m. and still, no sign of Raven.

Captain is pacing the fucking house while Royce keeps walking in and out the front door with his arms crossed over his chest.

I shake my head. Only hours gone, and the three of us are losing our damn minds. This girl, she’s got us all sorts of fucked up.

She had slipped out front only minutes after coming downstairs, and I was seconds from following her ass, but didn’t. I kept my feet planted and gave her the time I convinced myself she needed to build back the sass or fire she was ready to throw.

When fifteen minutes ticked by and she still hadn’t walked back in, I knew without looking she took off, pulled a fucking Raven and made a solo decision.

And a solo decision meant a stupid fucking decision.

That’s the thing about Raven Carver, she does whatever the hell she wants, makes shitty judgment calls in a snap that you never see coming, and hopes it’ll all work out in the end, fuck the consequences.

I can’t fucking stand it.

Her ass has to stop taking off without us when she knows there’s nothing but trouble waiting in the dark. This is something Bass fucking Bishop should have thought about before he asked her to slip away from us and meet him at the warehouses last night where she ended up getting fucking jumped.

He may be our bookie for all events out at the warehouses and a damn good one at that, but that’s my fucking girl. He should’ve known better.

I might talk to my brothers about blacklisting his punk ass for that move alone – everyone on hand is replaceable, Raven is not. He should have fucking thought of that.

The second we realized she ran, we tossed him out, called up our boys, and went searching.

The problem, Raven’s spent the better part of her life sneaking around others. We knew we’d only find her if she wanted us to. Going to look was more us hoping her ass was walking around to clear her mind.

Hours ticked by and she was nowhere in sight, so we came home to wait her out while our boys kept looking, hitting random house parties around town in search of her.

“I still think Bass is hiding something,” Royce spits, tilting his head to look along the porch. “Little bitch is out pretending to hunt for her, he prolly knows exactly where she’s at.”

Captain shakes his head. “If he does know something, no way will he give it up now.” He looks to me. “He knows we’d ream his ass for not talking last night after she got her ass beat on his time.”

My jaw locks at his words, and I grind my teeth.

He’s right, we would. I might for the fuck of it at this point.

My phone dings against the countertop and all our heads snap toward it. I jerk, quickly grabbing and unlocking it, completely fucking annoyed when I read my boy Mac’s message on the screen. I toss it back down.

“Mac got a hold of that Mello chick she went to The Tower with. She’s in fucking Maui – hasn’t talked to Raven since we dropped her shit off.”

Cap looks to his phone right then, frowning down at the screen. “Leo said he just searched the school grounds and park again.” He stuffs it back in his pocket. “No Raven.”

I jump to my feet, glancing from Captain to Royce. “I’m going to look again.”

Royce has his keys in his hand in seconds, but Captain’s features tighten.

“What?” Royce drags out suspiciously.

“We’ve got a game to play tomorrow, or fuck, today now.” Cap licks his lips, glancing back our way. “We have to be ready for it.”

Royce’s brows snap together. “Cap. No.” He shakes his head. “Maddoc, tell him.”

When I don’t say anything, Royce slices his eyes to Captain. “We’re not fucking going if she’s not back!”

Cap is cautious with him. “Royce—”

Captain glances from him to me. “We watched on the surveillance cameras, we know nobody took her. She ran. And you know if it weren’t for the game, I’d be in the damn driver’s seat already, but we need to be there, and we need to play well.”

“And if she shows up, packs her shit or something while we’re gone?!” Royce shouts, a frenzied look in his eye. “I’m not fucking leavin’!”

I rub at my temples. Cap’s right, we have to play well, but damn, this is Raven we’re talking about.