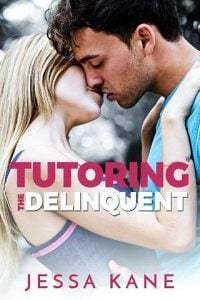 On the way to my new tutor’s dorm room, I want to punch a hole in the hallway wall.

It’s like this all the time now. The relentless anger slithers inside of me like oily snakes. I’ve worked myself to the bone on the football field in an attempt to exhaust the roiling emotions inside of me, but nothing ever gives. There’s a bowling ball sitting on my chest, pressing down, down, so hard that I can’t breathe sometimes and the only thing that relieves it for even a moment is destruction. Breaking shit. Acting out as my college counselor calls it.

She can call it whatever she wants—it feels good.

Rebelling is the only thing that helps melt the resentment lately.

On my way past a room of students, they look up from their phones and gasp.

“Is that Teddy Xavier?”

During my first three years of school, I would have waved and flashed them a smile that’s going to earn me millions of dollars in endorsement deals one day, when I’ve been drafted to the NFL. But now? I give them the finger and keep walking, the constant roaring in my ears growing louder. I already hate this fucking tutor. Iris Stirling. She’s going to be smug as hell, I bet. She’s the only thing standing between me and the championship game next week. If I don’t pass my Western Civilization test, I don’t play. I’m already skating on thin ice after getting picked up by the cops for being drunk and disorderly in public. Breaking into a few cars, just because I could. Because I needed to distract myself from the pain.

So I’m sure Iris Stirling—what a stupid name—is getting off on a major power trip right now, telling all of her friends that she has Teddy Xavier by the short and curlies. As long as she helps me pass the history course, she can brag all she wants—I just need to be on the field.

Lately, being on the gridiron has been less about football and more about the temporary relief I get from the constant anger when I’m tackled hard. But that’s another story.

I stop in front of her closed dorm room door and wrap my hands around the jamb. She’s in there, chattering away on the phone, and I have to resist the urge to kick in the door, splinter it right there on the hinges. Just to set the tone. I’m going to let her teach me the shit I need to know to pass the test and play in the championship game, but that’s where it ends. I’m not her shortcut to popularity or claim to fame. God, I hate her already. I hate everyone.

Especially him. For leaving. For checking out early.

What the hell is the point of this anymore?

Breathing through the wave of emptiness that passes through me, I bang a fist on the door, ready to finally meet this chick. Iris. Apparently she’s the campus genius. Too bad she sounds like a basic idiot from this side of the door.

And when she opens that door and we come face to face, I’m relieved to be right. Already I can’t stand her. She looks like every other fucking cheerleader or co-ed who follows me around campus with dreams of babies and a mansion in their heads. Fuck that. I want nothing to do with any of them, especially since the funeral. I had hundreds of them during my first three years at the university and I can’t recall a single face, so what would be the point, anyway?

My scowl doesn’t stop her from twisting hair around her finger and giggling. “I can’t believe it. Mr. Teddy Xavier himself in my dorm room.”

“Yeah, Iris,” I grit, bitterly, wishing I had a fifth of whiskey in my hand. “Lucky you.”

“Oh, I’m not Iris,” she laughs, as if it was a wild assumption. “Iris is my roommate.” She cups a hand around her mouth and whispers, “Poor you.”

Irritated that this girl, who is apparently not the campus genius, has wasted a full minute of my life, I duck beneath the door frame and enter the room, my stride pausing when I see the other occupant. She’s sitting on a twin bed with her head bowed, curtains of messy blonde hair hiding her face. Her green cardigan is old and thin, buttoned up to her chin, knees pressed together in her leggings. There’s a Western Civilization book in her lap and she appears to be holding on to it for dear life.

“Iris,” I say, my voice a hell of a lot softer than when I addressed the other chick…and I have no idea why. “Are you Iris?”

She nods, her knuckles turning white around the textbook. Is she scared of something? I wouldn’t blame her. She looks like she could be picked up and carried away by a gust of wind.