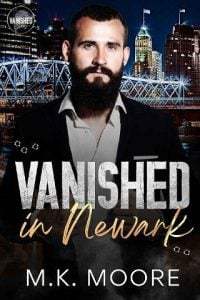 “What’s the status?” I ask impatiently, trying to keep calm. Taking over the O’Brien Crime Syndicate was not something I thought would happen so soon. The Popov's have been systematically trying to take over the East Coast, killing those in charge of the various families. Four family members have been taken out, and I was next in line to be the boss. The only problem is I am not made for this life.

I have issues. I stutter, am awkward in social situations, and can’t look people in the eye. Empathy, sympathy, and love are mythical to me. I believe others feel them, but I do not. I know my own limitations. I know what I am capable of.

In some ways, I am perfect for the job— cold detachment will finally work in my favor.

My parents never tested me for anything, and I believe it’s too late now. I am set in my ways. Despite my wishes or anyone else’s in the family, I’m in charge now. I have been on the job less than a year, and already I am feeling the kind of pressure my father must have felt every day since my grandfather died twenty years ago.

“There have been no reported sightings of them, boss,” Cillian, my cousin and second in command, says.

“They have gone underground.”

“Boss, have you had a day off since the funerals?” he asks, referring to my parents and our aunt and uncle, who were taken out while they were at the theatre. My father was in charge of the family, and my uncle was his right-hand man. They had taken their wives to see a show on Broadway and were gunned down during intermission. There is no point in stating that I don’t want to do this, but I have no choice. There are things at play that are now my responsibility. As soon as I sat down at my father’s desk, I had a terrible feeling that I was going to fuck everything up and get my entire family buried. I set that feeling aside; I had to. I made Cillian my second even though he’s my younger cousin. His brother Everett is out in LA, becoming a surgeon. The family paid for that. We can’t keep going to veterinarians every time one of us gets shot. We need someone on the payroll that we can trust, and Everett was it. My other cousin Gage just joined us as an enforcer. The man has a lot of rage to work out. He might as well make some money while he’s at it. His father, my other uncle, didn’t get taken out because he forsook the family for love many years ago. That is in the past though. Now is not the time to keep family away.

“Just a half-day on Sunday. It was a working break, really. We pledged protection to McGinty’s for the big game. They wanted ten guys, so I joined the others. You should take some time off. I can hold the fort down for a few days.”

“I have decided something, and I need you to back me up on it,” I say, ignoring his comment about a vacation.

“What do you mean, out? You want to kill him? Boss, this would be your first example. Is that old man really how you want to do it?.”

“I want him out now. He was my father’s man. He and I didn’t get along. Besides, he’s barely fifty.” When I was a child, he was twenty years older than me, as was my father. I couldn’t see him for what he was then, but I can now. The worst kind of bully. I was clearly struggling, and my parents ignored it. Colin made my already miserable existence worse. I may have had the best of everything money could buy, food, clothes, schooling, but none of that mattered. I was always on the outside, looking in. I often wonder if drugs could have helped and made me more normal, but I know that I wouldn’t be the man I am today if that was the case. I’m a firm believer in things happening for a reason, but I can’t do this knowing Colin is out there, criticizing my every word, let alone action. He never touched me, but he’d get in my face with his whiskey and cigar breath and torment me. Torment me for being small, for being odd, for stuttering. You name it, he called me it. He was a dick back then, and even now, when I essentially demoted him to oversee the enforcers, he still makes his snide remarks. I don’t give a fuck if it is petty; I want him dead.